I want to see how my eco-actions can scale to be part of larger climate change solutions. Pick-n-Pull and its parent company Schnitzer Steel offer industrial-scale hope in that regard.

If you drive down Foster Road in Portland, east of the 205 freeway, you pass several auto and truck service companies. Most of us keep moving. But one of those places is Pick-n-Pull. They buy decrepit vehicles and put them in a large yard, where handy people remove parts from them. It’s an old salvage concept. Until recently, I ignored them. 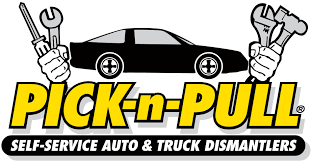 It was HARD to drive our 2001 Volvo into Pick-n-Pull. We lovingly called it Enrique. But the mechanic said the front-end assembly was shot (estimate: $2500), and that was only the beginning of what would be needed if we kept it in the family.

We sadly but gratefully accepted $305 from the Pick-n-Pull buyer. We had gotten an “instant offer” over the phone based on make, model and year. No, it didn’t matter whether it ran, they were going to “dismantle” it. We received assurance that they would recycle the oil and the battery.

That got me in one of their doors so to say.

Our next vehicle was a 2004 Toyota Siena van. We call it Sierra. It was in excellent condition when it came to us. However, I had an encounter with a big buck deer on a dark road in south-central Oregon. I swerved. The passenger side mirror hit the deer. By the time I turned around he had walked away. I was thankful for that. It could have been a disaster for both of us.

But the mirror was broken.

Now I visit the parts part of Pick-n-Pull, a whole ‘nother entrance. Yes, they have a 2006 Toyota Van, “Go have a look.” I pay $2 to enter the yard. It’s like a do-it-yourself school yard. Most of the people are a little grungy. Men and women. Some couples. Plenty of diversity. Some deep in a surgical process, a headlight, a door rest, under the chassis… Then there are those carrying or wheelbarrowing their automotive treasures. A guy carries what may be a drive shaft over his shoulder. Another manhandles a silvery hood.

At the designated row, I approach the candidate van. Its front has been smashed. Ouch! But the mirrors are intact. One matches the picture I took of my broken mirror. Three torque screws hold it on. I’m glad I bought the torque driver for my dishwasher repair project. The price when I pay at the front desk: $15.

Back home I discover there are five wires in the replacement versus four wires in the old(er) mirror. Still, I can adjust the mirror manually. No problem!

When I took the Toyota in for service, I learned that the upper center brake light was out. No, you can’t replace just a bulb. It’s a whole assembly with a bunch of little lights. It costs more than $300 installed. Ouch!

I take another trip down to Pick-n-Pull. Sure enough, they have another van for me to look at. Indeed, though the body paint is different, the brake light assembly is red. This time, two screws held it on; the two wires matched the two wires in my van; and the price is only $7. Ta-da!

I ask about my old Volvo. It is long gone. “We only keep cars in the yard six weeks or so.” This is only a step in a much larger reuse and recycling process.

I did not brag about the money I saved to my very helpful Toyota service woman. I had already parted with $2400 for work on brakes, shocks and steering, which are outside my wheelhouse. I just said, “I’m not a mechanic, but I can handle two screws.”

Along the way, an employee told me that Pick-n-Pull is owned by Schnitzer Steel. I checked out the parent company’s website. According to their 2021 Sustainability Report, accomplishments include:

I’m no longer sad; I’m proud to be part of an evolving large-scale circular economy.

BIO: Jon Biemer is author of Our Environmental Handprints: Recover the Land, Reverse Global Warming, Reclaim the Future. He practices Organizational Development consulting, dba Creating Sustainability. He is currently working on his next book with the working title, Creating Sustainability: This is What it Takes. His website is www.jonbiemer.com.

Regarding the Fate of Humanity on Planet Earth