The Quartermaster supervises, stores, and distributes supplies and provisions. The Quartermaster is also the one responsible for making sure equipment, materials, and systems are available and functioning. The purpose of the Quartermaster’s Report is to research and publish the data that describes the status of the ship, in this case “This Spaceship Earth.” The reason for taking a planetary perspective is to realign our individual viewpoints and assumptions about resource quantity, quality, and demand with that of TSE’s current operational capability, capacity, and actual status. This is not about what is preferred or desired, but what is. Therefore, in the world of the Quartermaster, if a 16 oz. glass has eight ounces of liquid, the glass is neither half full nor half empty – it simply has eight ounces of liquid.

Comparing data from June 2017 with September 2016 and the 1st (2015) Quartermaster’s Report (QMR) published in the book “This Spaceship Earth” by David Houle and Tim Rumage.

Globally – averaged temperatures in 2016 were 1.78 degrees Fahrenheit (0.99 degrees Celsius) warmer than the mid:20th century mean. This makes 2016 the third year in a row to set a new record for global average surface temperatures.

Gavin Schmidt, director of NASA’s Goddard Institute for Space Studies, said. “It’s unprecedented in 1,000 years. There’s no period that has the trend seen in the 20th century in terms of the inclination (of temperatures).”

from fossil-fuel combustion and industrial processes

+ estimate based on current rate of emissions

Today humanity uses the equivalent of 1.7 planets to provide the renewable resources we use and to absorb our waste. This means it now takes the Earth 20.4 months to regenerate what we use in 12 months.

There is more to Global Warming than CO2 emissions. The four major greenhouse gases are Carbon Dioxide (CO2), Methane (CH4), Nitrous Oxide (N20) and Fluorinated Carbons.  Carbon Dioxide has received the most focus because of the large quantities of CO2 released into the atmosphere each year. 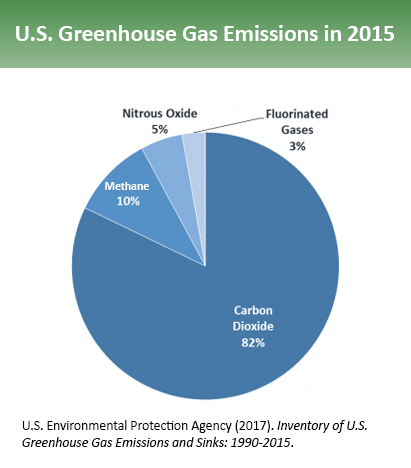 But the other gases all have greater Global Warming Potential (GWP).

When measuring their 100 year Global Warming Potential, CO2 is the baseline.

Carbon dioxide emissions from energy have not increased for three years in a row even as the global economy grew, the International Energy Agency (IEA) said. Global emissions from the energy sector were 32.1 billion metric tonnes in 2016,the same as the previous two years, while the global economy grew 3.1%. The stabilizing of CO2 emissions reflects a decreased use of coal coupled with an increased use of shale gas/natural gas, nuclear energy and other alternative/renewable energy sources.

In an effort to reduce CO2 emissions, companies and countries are reducing their use of coal and switching to and increasing their use of natural gas. Given that natural gas is a fossil fuel composed almost entirely of methane, (https://www.aga.org/what-natural-gas), this switch can actually increase Global Warming as methane has 21 times the global warming potential of CO2.

As we examine the viability of alternative fuels and energy sources, we need to make sure that we are reducing the overall global warming potential of the fuels we use, not just looking at the relative reduction of a single component and assuming that means a net-positive improvement in reducing or reversing global warming.

Greenland is losing 350 gigatonnes of ice annually – 50% from ice melt, and 50% from glaciers moving into the ocean and breaking up into icebergs, which then melt.

The loss of Greenland ice is six times the volume of all the glaciers in the Alps.

Greenland has been melting more mass than it accumulates since 2000, putting Greenland in a negative balance.

Because the planet is warming, the glaciers in the Antarctic are losing an average of 83 gigatonnes of ice per year (91.5 billion US tons). This is the equivalent of losing the water weight of Mount Everest every two years. “The mass loss of these glaciers is increasing at an amazing rate,” said scientist Isabella Velicogna.

Coral reefs, the “rainforests of the sea,” are some of the most biodiverse and productive ecosystems on earth. They occupy only 0.2% of the ocean, yet are home to a quarter of all marine species: crustaceans, reptiles, seaweeds, bacteria, fungi, and over 4000 species of fish make their home in coral reefs. With an annual global economic value of $375 billion, coral reefs provide food and resources for over 500 million people in 94 countries and territories. But tragically, coral reefs are in crisis.

The world has lost roughly half its coral reefs in the last 30 years.

Over the last 30 to 40 years, 80% of coral in the Caribbean have been destroyed as well as 50% of coral reefs in Indonesia and the Pacific.

24 billion tonnes of fertile or 12 million hectares of topsoil are lost every year. The world population continues to increase while we destroy more and more topsoil. If this is allowed to continue there won’t be enough fertile soil left to feed a growing world population.

Earth has lost a third of arable land in the past 40 years.

It takes approximately 500 years to replace 25 millimeters (1 inch) of topsoil lost to erosion. The minimal soil depth for agricultural production is 150 millimeters. From this perspective, productive fertile soil is a nonrenewable, endangered ecosystem.

“Average (US) soil loss rate is 5.8 tons per acre per year, and increasing.”

Plastics and Pollution in the Ocean

Eight million metric tones of plastic pollution enter the oceans each year from the world’s 192 coastal countries based on 2010 data. That is the equivalent of five grocery bags full of plastic trash on every foot (30 cm) of every nation’s coastline around the globe.

Between 15% and 31% of the estimated 9.5 m tonnes (IUCN 2016) of plastic released into the oceans each year could be primary microplastics, almost two-thirds of which come from the washing of synthetic textiles and the abrasion of tires while driving.

Tiny plastic particles washed off products such as synthetic clothes and car tires could contribute up to 30% of the ‘plastic soup’ polluting the world’s oceans and – in many developed countries – are a bigger source of marine plastic pollution than plastic waste.

Alan Jamieson of Newcastle University, England and his team have been able to sample amphipods from the Mariana Trench in the northern Pacific – the deepest part of the world’s oceans.

Examination of the Amphipods showed that they were contaminated with PCBs — polychlorinated biphenyls*. “Every sample we had,” Jamieson says, “had contaminants in it at very high or extraordinarily high levels.” He compared the contamination level in his Mariana amphipods to crabs living in waters fed by one of China’s most polluted rivers, as well as amphipods from other parts of the world. “And what we were finding in the deepest place in the world were (levels) hugely higher, 50 times in some cases,” he says. He thinks the pollutants might get to the trenches by latching on to plastic that’s floating in the ocean. Fish and other marine animals absorb pollutants, as well. Eventually, the plastic and the dead animals fall to the bottom.

*(PCB production was banned by the United States Congress in 1979 and by the Stockholm Convention of Persistent Organic Pollutants in 2001.

One of the highest concentrations of toxic pollutants ever recorded in a marine mammal has been revealed in a Scottish killer whale that died in 2016. The adult whale, known as Lulu, was a member of the UK’s last resident pod. The level of PCBs found in Lulu’s blubber were 950mg/kg, more than 100 times the 9mg/kg limit above which damage to the health of marine mammals is known to occur. A 2016 analysis showed the average concentration for killer whales in the Northeast Atlantic was about 150mg/kg.

July 2016 was the hottest July ever recorded globally in 136 years of modern record keeping. July continued a streak of ten consecutive months (since October 2015) that have set new monthly high-temperature records.

Gavin Schmidt, director of Nasa’s Goddard Institute for Space Studies, said. “It’s unprecedented in 1,000 years. There’s no period that has the trend seen in the 20th century in terms of the inclination (of temperatures).”

from fossil-fuel combustion and industrial processes

in parts per million (ppm)

Today humanity uses the equivalent of 1.6 planets to provide the renewable resources we use and absorb our waste. This means it now takes the Earth 19.2 months to regenerate what we use in 12 months

In the past 30 years

The increase in land covered by water is due to sea level rise, the reservoirs that result from damming rivers, and the melt of glaciers thus turning them into lakes.

The two leading causes of increased land area are the drainage of lakes/inland seas and creation of artificial islands for real estate development and territorial claims.

Subsidence: The gradual caving in or sinking of an area of land

Due to over pumping of ground water, many coastal cities are subsiding (sinking) faster than sea level is rising.

According to the UN Environment Programme, the Earth is in the midst of a mass extinction of life. Scientists estimate that 150-200 species of plant, insect, bird and mammal become extinct every 24 hours.

Crew, There are two questions you might consider as you review this update.

First – how well do your assumptions about each topic match the reality of the data?

Second – does the information reflect an outcome that you wish humanity to achieve?

Your reflection and your response to your answers of those two questions will determine your consciousness and participation in defining and creating our common future.