When businessman Howard Bisla was tasked with saving a local shop from financial ruin, one of his first concerns was energy efficiency. In June 2018, he approached his local electricity provider in Sacramento, California, about upgrading the lights. The provider had another idea. It offered to install an experimental cooling system: panels that could stay colder than their surroundings, even under the blazing hot sun, without consuming energy.

The aluminium-backed panels now sit on the shop’s roof, their mirrored surfaces coated with a thin cooling film and angled to the sky. They cool liquid in pipes underneath that run into the shop, and, together with new lights, have reduced electricity bills by around 15%. “Even on a hot day, they’re not hot,” Bisla says.

The panels emerged from a discovery at Stanford University in California. In 2014, researchers there announced that they had created a material that stayed colder than its surroundings in direct sunlight1. Two members of the team, Shanhui Fan and Aaswath Raman, with colleague Eli Goldstein, founded a start-up firm, SkyCool Systems, and supplied Bisla’s panels. Since then, they and other researchers have made a host of materials, including films, spray paints and treated wood, that stay cool in the heat.

These materials all rely on enhancing a natural heat-shedding effect known as passive radiative cooling. Every person, building and object on Earth radiates heat, but the planet’s blanket-like atmosphere absorbs most of it and radiates it back. Infrared rays between 8 and 13 micrometres in wavelength, however, are not captured by the atmosphere and leave Earth, escaping into cold outer space. As far back as the 1960s, scientists sought to harness this phenomenon for practical use. But passive radiative cooling is noticeable only at night: in the daytime, sunlight bathes us in much more heat energy than we can send into space. 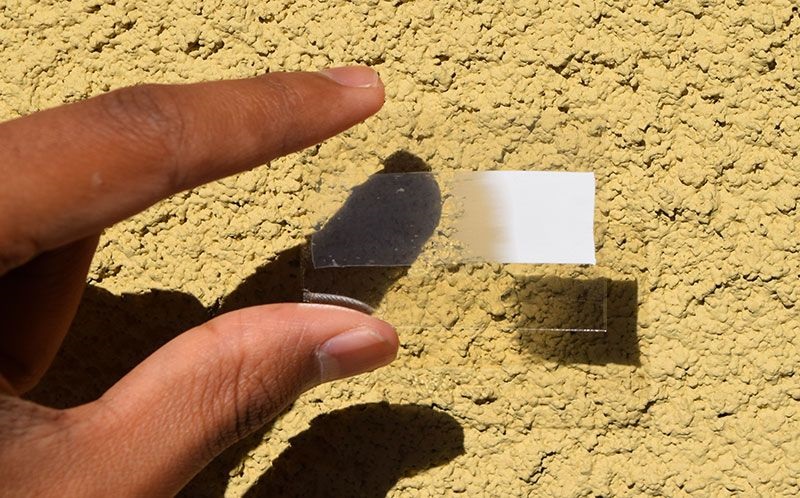 The new materials reflect a broad spectrum of light, in much the same way as mirrors or white paint do. In the crucial 8–13-µm part of the infrared spectrum, however, they strongly absorb and then emit radiation. When the materials point at the sky, the infrared rays can pass straight through the atmosphere and into space. That effectively links the materials to an inexhaustible heat sink, into which they can keep dumping heat without it coming back. As a result, they can radiate away enough heat to consistently stay a few degrees cooler than surrounding air; research suggests that temperature differences could exceed 10 °C in hot, dry places2,3. David Sailor, who leads the Urban Climate Research Center at Arizona State University in Tempe, has termed them super-cool materials.

These materials might not only save on electricity bills, say enthusiasts, but also reduce a surge in demand for power-hungry refrigeration and air conditioning as the world warms. “My belief is that in four to five years, daytime radiative cooling systems will be the number one technology for buildings,” says Mattheos Santamouris at the University of New South Wales in Sydney, Australia, who himself is working to improve such materials. “It is the air conditioner of the future.”

Researchers are looking at other ways to increase the materials’ cooling ability. Last October, Evelyn Wang at the Massachusetts Institute of Technology in Cambridge and her colleagues reported that covering a radiative-cooling film with a light, insulating aerogel kept the structure 13 °C cooler than its surroundings at noon in the dry Atacama Desert in Chile, compared with just 1.7  °C without the aerogel3. The aerogel concept could be used with other super-cool materials, she says.

Read the entire article at Nature.