NOTE: This post is a synopsis of the Executive Summary of the entire 52 page report. The report is well-researched. It’s a comprehensive primer on our climate crisis. And it is sobering, given that it was published by a branch of the US Department of Defense. You can read the entire publication at 2019 Report – Implications of Climate Change for the U.S. Army. 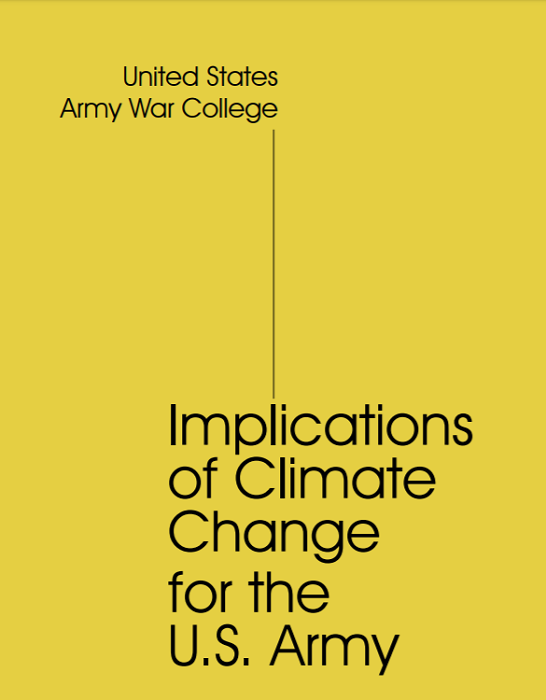 Significant changes in climate have already occurred, likely to worsen in the years ahead. This study assumes that human behavior can mitigate both the size and consequences of negative impacts that result from climate change. Initial findings of the study focus on changes to the physical environment and the human response to those changes. Sea level rise, changes in water and food security, and more frequent extreme weather events are likely to result in the migration of large segments of the population. Rising seas will displace tens (if not hundreds) of millions of people, creating massive, enduring instability. This migration will be most pronounced in those regions where climate vulnerability is exacerbated by weak institutions and governance and underdeveloped civil society. Recent history has shown that mass human migrations can result in increased propensity for conflict and turmoil as new populations intermingle with and compete against established populations.

More frequent extreme weather events will also increase demand for military humanitarian assistance. Salt water intrusion into coastal areas and changing weather patterns will also compromise or eliminate fresh water supplies in many parts of the world. Additionally, warmer weather increases hydration requirements. This means that in expeditionary warfare, the Army will need to supply itself with more water. This significant logistical burden will be exacerbated on a future battlefield that requires constant movement due to the ubiquity of adversarial sensors and their deep strike capabilities. A warming trend will also increase the range of insects that are vectors of infectious tropical diseases. This, coupled with large scale human migration from tropical nations, will increase the spread of infectious disease.

The Army has tremendous logistical capabilities, unique in the world, in working in austere or unsafe environments. In the event of a significant infectious disease outbreak (domestic or international), the Army is likely to be called upon to assist in the response and containment.

Arctic ice will continue to melt in a warming climate. These Arctic changes present both challenges and opportunities. The decrease in Arctic sea ice and associated sea level rise will bring conflicting claims to newly-accessible natural resources. It will also introduce a new theater of direct military contact between an increasingly belligerent Russia and other Arctic nations, including the U.S. Yet the opening of the Arctic will also increase commercial opportunities. Whether due to increased commercial shipping traffic or expanded opportunities for hydrocarbon extraction, increased economic activity will drive a requirement for increased military expenditures specific to that region. In short, competition will increase.

The increased likelihood of more intense and longer duration drought in some areas, accompanied by greater atmospheric heating, will put an increased strain on the aging U.S. power grid and further spur large scale human migration elsewhere. Power generation in U.S. hydroelectric and nuclear facilities will be affected. This dual attack on both supply and demand could create more frequent, widespread and enduring power grid failures, handicapping the U.S. economy.

In addition to the changing environmental conditions that will contribute to a changing security environment, climate change will likely also result in social, political, and market pressures that may profoundly affect the Army’s (and DoD’s) activities. Studies indicate that global society, including in the U.S., increasingly views climate change as a grave threat to security. As the electorate becomes more concerned about climate change, it follows that elected officials will, as well. This may result
in significant restrictions on military activities (in peacetime) that produce carbon emissions. In concert with these changes, consumer demands will drive market adaptation. Businesses will focus on more environmentally sound products and practices to meet demand.

The DoD does not currently possess an environmentally conscious mindset. Political and social pressure will eventually force the military to mitigate its environmental impact in both training and wartime. Implementation of these changes will be costly in effort, time and money. This is likely to occur just as the DoD is adjusting to changes in the security environment previously highlighted.