Editor’s Note: This is an excellent job of reporting by George Monbiot that appears in full in The Guardian. It validates our premise in “Moving to a Finite Earth Economy” that our current form of capitalism, plus our consumer society, are the root causes of our climate crisis. And that until we make a drastic change to those systems, individual acts to reduce our carbon footprints (even when multiplied by billions) will not be enough to avoid catastrophe.

Fossil fuel giants have known the harm they do for decades. But they created a system that absolves them of responsibility. Let’s stop calling this the Sixth Great Extinction. Let’s start calling it what it is: the “first great extermination”. A recent essay by the environmental historian Justin McBrien argues that describing the current eradication of living systems (including human societies) as an extinction event makes this catastrophe sound like a passive accident. 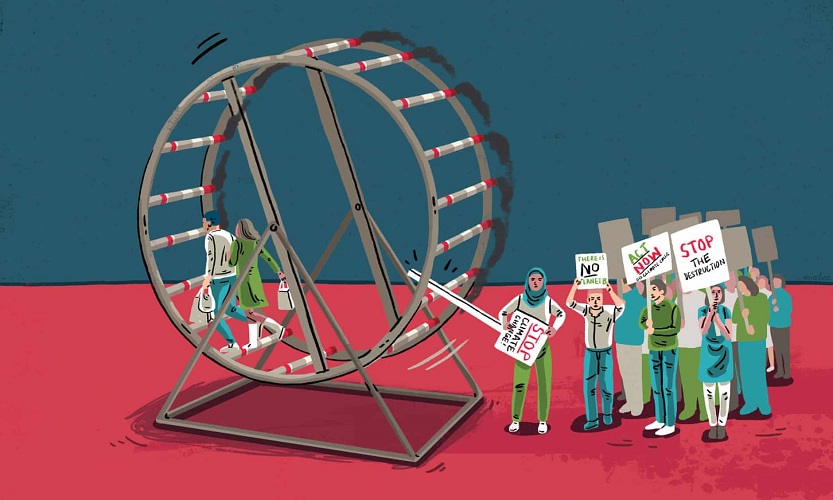 Illustration by Eva Bea for The Guardian

While we are all participants in the first great extermination, our responsibility is not evenly shared. The impacts of most of the world’s people are minimal. Even middle-class people in the rich world, whose effects are significant, are guided by a system of thought and action that is shaped in large part by corporations.

20 fossil fuel companies, some owned by states, some by shareholders, have produced 35% of the carbon dioxide and methane released by human activities since 1965. This was the year in which the president of the American Petroleum Institute told his members that the carbon dioxide they produced could cause “marked changes in climate” by the year 2000. They knew what they were doing.

Even as their own scientists warned that the continued extraction of fossil fuels could cause “catastrophic” consequences, the oil companies pumped billions of dollars into thwarting government action. They funded think tanks and paid retired scientists and fake grassroots organizations to pour doubt and scorn on climate science. They sponsored politicians, particularly in the US Congress, to block international attempts to curtail greenhouse gas emissions. They invested heavily in greenwashing their public image.

These efforts continue today, with advertisements by Shell and Exxon that create the misleading impression that they’re switching from fossil fuels to renewable energy. In reality, Shell’s annual report reveals that it invested $25bn in oil and gas last year. But it provides no figure for its much-trumpeted investments in low-carbon technologies.

But the biggest and most successful lie it tells is this: that the first great extermination is a matter of consumer choice. In response to the Guardian’s questions, some of the oil companies argued that they are not responsible for our decisions to use their products. But we are embedded in a system of their creation – a political, economic and physical infrastructure that creates an illusion of choice while, in reality, closing it down.

We are guided by an ideology so familiar and pervasive that we do not even recognize it as an ideology. It is called consumerism. It has been crafted with the help of skillful advertisers and marketers, by corporate celebrity culture, and by a media that casts us as the recipients of goods and services rather than the creators of political reality. It is locked in by transport, town planning and energy systems that make good choices all but impossible. It spreads like a stain through political systems, which have been systematically captured by lobbying and campaign finance, until political leaders cease to represent us, and work instead for the pollutocrats who fund them.

In such a system, individual choices are lost in the noise. Attempts to organize boycotts are notoriously difficult, and tend to work only when there is a narrow and immediate aim. The ideology of consumerism is highly effective at shifting blame: witness the current ranting in the billionaire press about the alleged hypocrisy of environmental activists. Everywhere I see rich westerners blaming planetary destruction on the birth rates of much poorer people, or on “the Chinese”. This individuation of responsibility, intrinsic to consumerism, blinds us to the real drivers of destruction.

The power of consumerism is that it renders us powerless. It traps us within a narrow circle of decision-making, in which we mistake insignificant choices between different varieties of destruction for effective change. It is, we must admit, a brilliant con.