To truly bring ourselves into harmony with the natural world, we must return to seeing humanity as part of it. Though a varied and complex story, the widespread separation of humans from nature in Western culture can be traced to a few key historical developments, starting with the rise of Judeo-Christian values 2000 years ago. Prior to this point, belief systems with multiple gods and earth spirits, such as paganism, dominated. They generally considered the sacred to be found throughout nature, and humanity as thoroughly enmeshed within it. 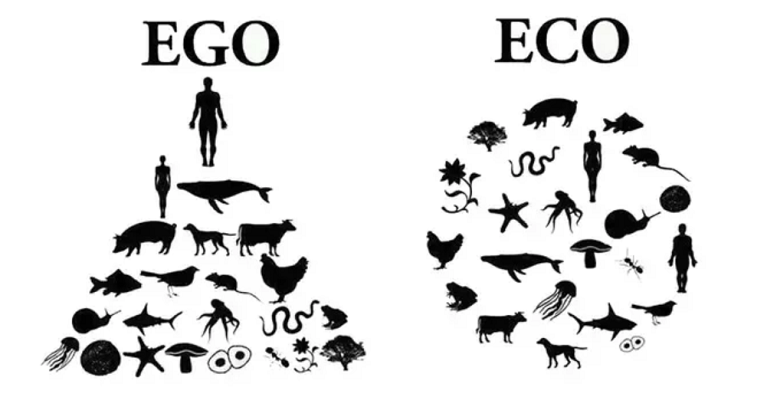 When Judaism and Christianity rose to become the dominant religious force in Western society, their sole god – as well as sacredness and salvation – were re-positioned outside of nature. The Old Testament taught that God made humans in his own image and gave them dominion over the Earth.

As historian Lynn White famously argued, such values laid the foundations of modern anthropocentrism, a system of beliefs that frames humans as separate from and superior to the nonhuman world. Indeed, those who hold literal beliefs in the Bible tend to express significantly more concerns over how environmental degradation affects humans than animals.

The good news is that the perceived separation from nature is not universal among the planet’s human inhabitants. Australian, Amerindian, and countless other indigenous belief systems often portray non-humans as kin with intrinsic value to be respected, rather than external objects to be dominated or exploited.

Eastern philosophies and religions such as Zen Buddhism also entangle humanity and nature, emphasising that there is no such thing as an independent self and that all things depend on others for their existence and well-being. For example, strongly influenced by Mahayana Buddhism, Bhutan has enshrined ecological resilience into its constitution. Mandating that at least 60% of the nation remain forested, the country is one of just two in the world to absorb more carbon than it emits. It measures progress not by GDP but against a “gross national happiness” index, which prioritises human and ecological well-being over boundless economic growth.

Of course, entanglement with nature exists in the Western world too. But the global socioeconomic systems birthed by this region were founded on the exploitation of the natural world for profit. Transforming these entrenched ways of working is no easy feat.

It will take time, and education is key. Higher education textbooks and courses across disciplines consistently perpetuate destructive relationships with nature. These must be redesigned to steer those about to enter the world of work towards care for the environment.

Read the entire article at The Conversation.

Financial Institutions Must Account for the Value of Natural Capital