The world’s driest desert is flooding and some of the planet’s wettest woodlands are burning. Welcome to summer in Chile.

Rains high up in the Andes mountains have led to torrents of water pouring into the Atacama desert below, sweeping away houses and roads. Meanwhile in the south, blistering temperatures have fueled forest fires, leading the government to declare some regions a disaster area. 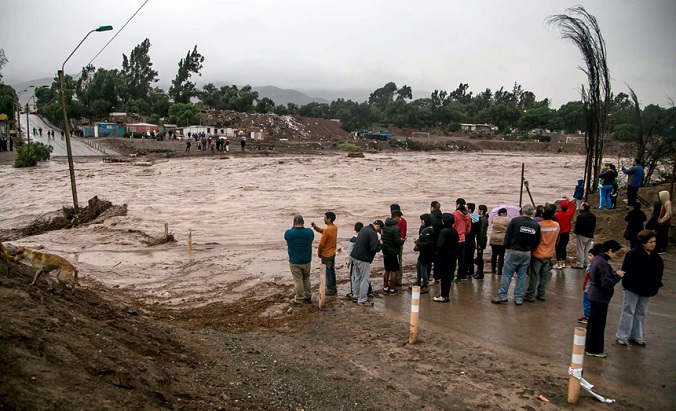 The disasters are part of a pattern of increasingly extreme weather in the country that stretches for 4,270 kilometers (2,650 miles) along South America’s south-west coast. The capital, Santiago, hasn’t received its average annual rainfall in a decade, while temperatures in the city beat the previous record by a whole degree Celsius last month. It was the third time in three years the city has set a record high.

“Chile needs to be thinking about how to adapt to climate change, as it has such an isolated climate that makes it more vulnerable to droughts,” said Park Williams, a hydroclimatologist at Columbia University in New York. “For the last several decades, temperatures have risen and precipitation has declined in central Chile, making it more susceptible to wildfires.”

In the south, more than 600 forest fires are raging through 9,500 hectares (23,475 acres) of land, an increase in burnt areas from the year before. Compounding the problem are dense plantations of pine and eucalyptus for the forestry industry.

In the north, in addition to the fatalities, 37,000 people in the town of Calama were left without tap water for four days. More than a hundred homes sustained major damage in the nearby tourist resort of San Pedro de Atacama.