Your civ is thriving, but your planet is dying. Do something!

Civilization 6 will get eight new Civilizations and nine new Leaders in the upcoming Gathering Storm expansion, along with some big changes to its core systems and a major late-game challenge to deal with in the form of man-made climate change. The trailer showcases how it will all come together, from early-game difficulties with the environment to randomized 21st-century Technology and Civics trees in the new “Future Era.” 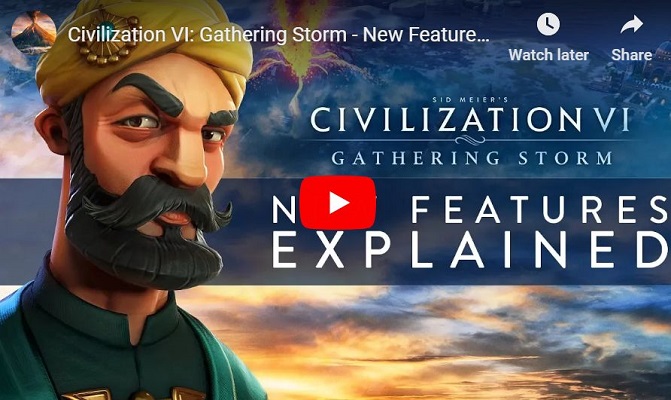 Disasters aren’t necessarily all bad. Volcanoes are inherently risky to build around for obvious reasons, but volcanic soil is extremely fertile; flooding rivers can wash away village improvements, but you may also see increased food yields when the floodwaters recede. Some of them, like grassland tornadoes, are bad news all around, while others will apparently have civ-specific benefits: Blizzards are tremendously destructive, but can also confer some “nice benefits” if you happen to be playing as Russia.

Strategic resources will be divided into Fuel, which will be of particular importance once you hit the Industrial Era, and Material. Unpowered buildings in Industrial (and beyond) cities will produce less than half their normal yield, and military units lacking the requisite Fuel and Material will be weaker in the field. The flipside of that new feature is that using some fuel types will release carbon dioxide into the air, driving up global temperatures (climate change) and leading to “unique consequences including increased storms or flooding, and rising sea levels.”

Green technologies can help alleviate the impact of climate change (careful with those nukes, though), and if you can make it into the new Future Era you’ll have the opportunity to make friends and influence people (and maybe save the world) through the World Congress, and advance through the randomized 21st-century Technology and Civics trees.