THIS SUNDAY, THE entire New York Times Magazine will be composed of just one article on a single subject: the failure to confront the global climate crisis in the 1980s, a time when the science was settled and the politics seemed to align. Written by Nathaniel Rich, this work of history is filled with insider revelations about roads not taken that, on several occasions, made me swear out loud. And lest there be any doubt that the implications of these decisions will be etched in geologic time, Rich’s words are punctuated with full-page aerial photographs by George Steinmetz that wrenchingly document the rapid unraveling of planetary systems, from the rushing water where Greenland ice used to be to massive algae blooms in China’s third largest lake.

Read the entire article at The Intercept.

The novella-length piece represents the kind of media commitment that the climate crisis has long deserved but almost never received. We have all heard the various excuses for why the small matter of despoiling our only home just doesn’t cut it as an urgent news story: “Climate change is too far off in the future”; “It’s inappropriate to talk about politics when people are losing their lives to hurricanes and fires”; “Journalists follow the news, they don’t make it — and politicians aren’t talking about climate change”; and of course: “Every time we try, it’s a ratings killer.” 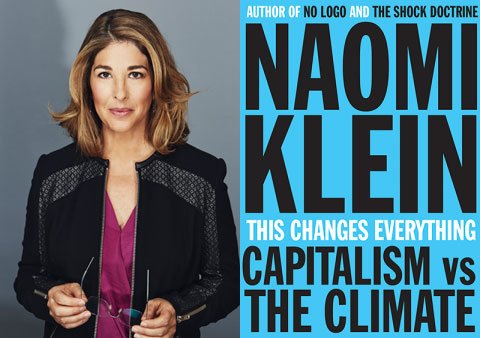 None of the excuses can mask the dereliction of duty. It has always been possible for major media outlets to decide, all on their own, that planetary destabilization is a huge news story, very likely the most consequential of our time. They always had the capacity to harness the skills of their reporters and photographers to connect abstract science to lived extreme weather events. And if they did so consistently, it would lessen the need for journalists to get ahead of politics because the more informed the public is about both the threat and the tangible solutions, the more they push their elected representatives to take bold action.

Which is why it was so exciting to see the Times throw the full force of its editorial machine behind Rich’s opus — teasing it with a promotional video, kicking it off with a live event at the Times Center, and accompanying educational materials.

That’s also why it is so enraging that the piece is spectacularly wrong in its central thesis.

According to Rich, between the years of 1979 and 1989, the basic science of climate change was understood and accepted, the partisan divide over the issue had yet to cleave, the fossil fuel companies hadn’t started their misinformation campaign in earnest, and there was a great deal of global political momentum toward a bold and binding international emissions-reduction agreement. Writing of the key period at the end of the 1980s, Rich says, “The conditions for success could not have been more favorable.”

And yet we blew it — “we” being humans, who apparently are just too shortsighted to safeguard our future. Just in case we missed the point of who and what is to blame for the fact that we are now “losing earth,” Rich’s answer is presented in a full-page callout: “All the facts were known, and nothing stood in our way. Nothing, that is, except ourselves.”

Yep, you and me. Not, according to Rich, the fossil fuel companies who sat in on every major policy meeting described in the piece. (Imagine tobacco executives being repeatedly invited by the U.S. government to come up with policies to ban smoking. When those meetings failed to yield anything substantive, would we conclude that the reason is that humans just want to die? Might we perhaps determine instead that the political system is corrupt and busted?)

This misreading has been pointed out by many climate scientists and historians since the online version of the piece dropped on Wednesday. Others have remarked on the maddening invocations of “human nature” and the use of the royal “we” to describe a screamingly homogenous group of U.S. power players. Throughout Rich’s accounting, we hear nothing from those political leaders in the Global South who were demanding binding action in this key period and after, somehow able to care about future generations despite being human. The voices of women, meanwhile, are almost as rare in Rich’s text as sightings of the endangered ivory-billed woodpecker — and when we ladies do appear, it is mainly as long-suffering wives of tragically heroic men.

All of these flaws have been well covered, so I won’t rehash them here. My focus is the central premise of the piece: that the end of the 1980s presented conditions that “could not have been more favorable” to bold climate action. On the contrary, one could scarcely imagine a more inopportune moment in human evolution for our species to come face to face with the hard truth that the conveniences of modern consumer capitalism were steadily eroding the habitability of the planet. Why? Because the late ’80s was the absolute zenith of the neoliberal crusade, a moment of peak ideological ascendency for the economic and social project that deliberately set out to vilify collective action in the name of liberating “free markets” in every aspect of life. Yet Rich makes no mention of this parallel upheaval in economic and political thought.

RECALL WHAT ELSE was going on. In 1988, Canada and the U.S. signed their free trade agreement, a prototype for NAFTA and countless deals that would follow. The Berlin wall was about to fall, an event that would be successfully seized upon by right-wing ideologues in the U.S. as proof of “the end of history” and taken as license to export the Reagan-Thatcher recipe of privatization, deregulation, and austerity to every corner of the globe.

It was this convergence of historical trends — the emergence of a global architecture that was supposed to tackle climate change and the emergence of a much more powerful global architecture to liberate capital from all constraints — that derailed the momentum Rich rightly identifies. Because, as he notes repeatedly, meeting the challenge of climate change would have required imposing stiff regulations on polluters while investing in the public sphere to transform how we power our lives, live in cities, and move ourselves around.

All of this was possible in the ’80s and ’90s (it still is today) — but it would have demanded a head-on battle with the project of neoliberalism, which at that very time was waging war on the very idea of the public sphere (“There is no such thing as society,” Thatcher told us). Meanwhile, the free trade deals being signed in this period were busily making many sensible climate initiatives — like subsidizing and offering preferential treatment to local green industry and refusing many polluting projects like fracking and oil pipelines — illegal under international trade law.

I wrote a 500-page book about this collision between capitalism and the planet, and I won’t rehash the details here. This extract, however, goes into the subject in some depth, and I’ll quote a short passage here:

We have not done the things that are necessary to lower emissions because those things fundamentally conflict with deregulated capitalism, the reigning ideology for the entire period we have been struggling to find a way out of this crisis. We are stuck because the actions that would give us the best chance of averting catastrophe — and would benefit the vast majority — are extremely threatening to an elite minority that has a stranglehold over our economy, our political process, and most of our major media outlets. That problem might not have been insurmountable had it presented itself at another point in our history. But it is our great collective misfortune that the scientific community made its decisive diagnosis of the climate threat at the precise moment when those elites were enjoying more unfettered political, cultural, and intellectual power than at any point since the 1920s. Indeed, governments and scientists began talking seriously about radical cuts to greenhouse gas emissions in 1988 — the exact year that marked the dawning of what came to be called “globalisation.”

Why does it matter that Rich makes no mention of this clash and instead, claims our fate has been sealed by “human nature”? It matters because if the force that interrupted the momentum toward action is “ourselves,” then the fatalistic headline on the cover of New York Times Magazine – “Losing Earth” — really is merited. If an inability to sacrifice in the short term for a shot at health and safety in the future is baked into our collective DNA, then we have no hope of turning things around in time to avert truly catastrophic warming.

If, on the other hand, we humans really were on the brink of saving ourselves in the ’80s, but were swamped by a tide of elite, free-market fanaticism — one that was opposed by millions of people around the world — then there is something quite concrete we can do about it. We can confront that economic order and try to replace it with something that is rooted in both human and planetary security, one that does not place the quest for growth and profit at all costs at its center.