Florida is awash in toxic algae right now. Blue-green algae covers 90 percent of Lake Okeechobee. It’s now grown thick in the canals connecting the lake to the St. Lucie River on the east coast, as well as in the Caloosahatchee River near Fort Myers on the west coast.

Read the entire article at the Tampa Bay Times .

Meanwhile a long-running Red Tide algae bloom on the state’s west coast has been killing sea turtles and manatees in the Boca Grande area, according to river advocates and fishing captains. Fish kills and respiratory complaints have been pouring into the state wildlife commission from four counties. 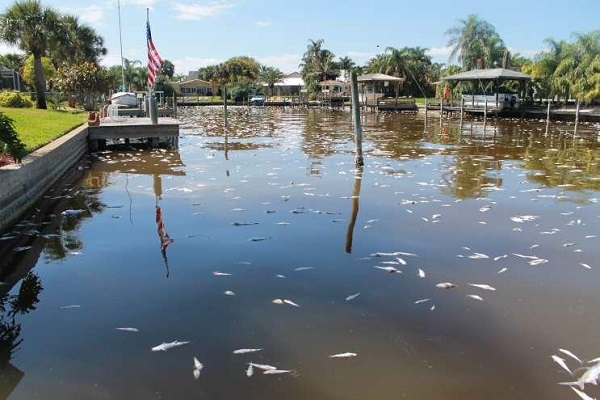 Both algae blooms are wrecking the coastal economy in the areas they’re afflicting. And both are fueled by climate change as warmer water temperatures boost the likelihood of blooms.

The toxic algae are always present in the Gulf of Mexico and other waterways around the state. Only under certain circumstances does their population suddenly explode into an algae bloom that can kill fish and irritate humans’ respiratory systems.

Algae blooms, particularly Red Tide, have been documented as occurring along Florida’s shoreline dating back to the days of the Spanish conquistadors. But in Florida and around the nation, blooms are now occurring more frequently and are lasting longer.

The state’s Red Tide bloom now stretches from Sarasota County’s beaches all the way down to the ones in Collier County, and it began back in November, according to Florida Fish and Wildlife Research scientist Kate Hubbard. (So far there is no sign it will migrate north to Tampa Bay.) “We’ve been watching it in Southwest Florida going on nine months,” Hubbard said. “It’s unusual to have a bloom last this long, but it’s not unheard of.”

Meanwhile the blue-green algae growing in the Caloosahatchee River covers miles of riverfront and keeps growing, according to Calusa Waterkeeper John Cassani. “I’ve worked around this river for 40 years and I’ve never seen anything like it,” said Cassani, a retired Lee County biologist. “I’ve never seen an algae bloom of this magnitude, or this toxic. It looks like another lost summer here.”

Harmful algae tend to bloom during warmer months. As climate change turns up the heat around the globe, more months become warmer. Climate change also tends to produce more rain, which can wash more nutrient pollution into waterways and further fuel a bloom.

Scientists predicted in a 2014 report for the National Oceanic and Atmospheric Administration that one effect of climate change would be a boom in blooms. A 2017 study by Tufts University scientists predicted that states in the Southeast would see greater economic harm from climate-fueled algae blooms.

This past May ranked as the warmest May ever recorded in the United States, although the land temperatures in Florida “weren’t remarkable at all,” said state climatologist David Zierden of Florida State University. The water temperatures, though, are running about 1 degree warmer than usual, and May saw record rainfall hit the state.

Cassani said that people in Southwest Florida affected by the algae blooms used to shy away from discussing them for fear of driving away tourists, anglers and potential real estate buyers. But this one, he said, is so bad that they’re talking about it — and discussing the role played by climate change. “You know we’re almost in shock down here,” he said, noting that the Red Tide bloom near Boca Grande has turned the waters into what he called “a killing zone.”

As for Connor, his fishing guide business is once again losing customers, just as he did during the 2016 algae bloom that shut down beaches in his area over the July 4 weekend. “Normally I’m out fishing the river at night for snook,” he said. He’s already lost customers and had to try to find other places to fish. “But I’m not just worried about the fishing any more,” he said. “I’m worried about the human health side of it now. … I’m not going to fish the St. Lucie River any more.”