Two years ago, the Paris Agreement kick-started the race to a low-carbon economy. In the 24 months since, business leaders have taken note of the clear signal that came out of Paris, and have embraced the opportunities of the massive economic transformation taking place globally.

327 major corporations have now committed to align their emission reduction plans with the goals of the Paris Agreement through the Science Based Targets initiative – and 85 of those companies have already had their science-based targets (SBT) approved. And this is just the beginning. 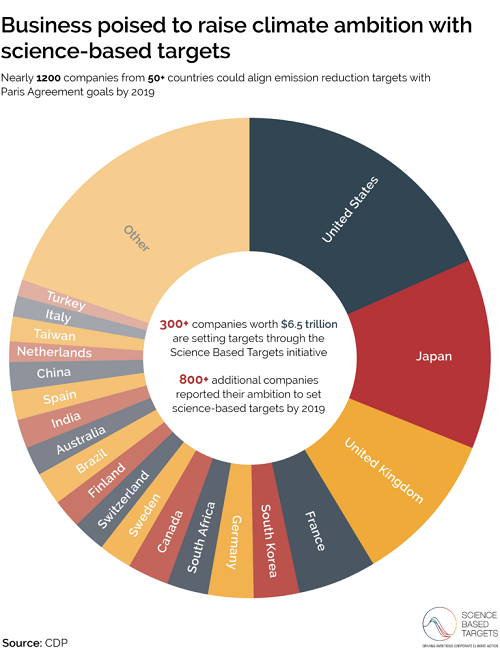 Recognition that targets must be aligned with climate science is growing; some 864 companies reporting to CDP in 2017 have stated their intention to set a science-based target within two years.

Together with those that have already formally set or committed to science-based targets through the Science Based Targets initiative, that’s nearly 1200 companies that could align their operations with the Paris Agreement by 2020. These companies span some 50 countries and 70 sectors. Some 40% of them – 496 companies – are among a sample of the world’s largest, most environmentally-impactful companies, which was determined by CDP in 2016.

Many companies are already taking steps towards achieving their ambitions. For example, construction and real estate company Daito Trust Construction and retailer Target Corporation, both reported their intention to set science-based targets to CDP in 2017. They have since committed to the SBTi.

In spite of the uncertainty surrounding the United States’ participation in the Paris accord at the national level, companies with headquarters in the U.S. are expected to continue to lead in terms of greatest number of commitments, making up 20% of the group.

The growing pace of corporate action is now impossible to ignore as hundreds of the world’s biggest businesses take bold action for the climate. This latest analysis is yet more evidence of the private sector’s growing readiness to support national governments as they look to ratchet up their own ambition by 2020.