How to incorporate solar and wind while keeping the electricity grid stable is a key question.

When it comes to generating renewable electricity, Hawaii is leading other states in almost every category. It gets 33 percent of its electricity from rooftop solar and has 60 utility-scale renewable energy projects feeding power into its grids. The state Legislature wants to reach 100 percent renewable energy by 2045. 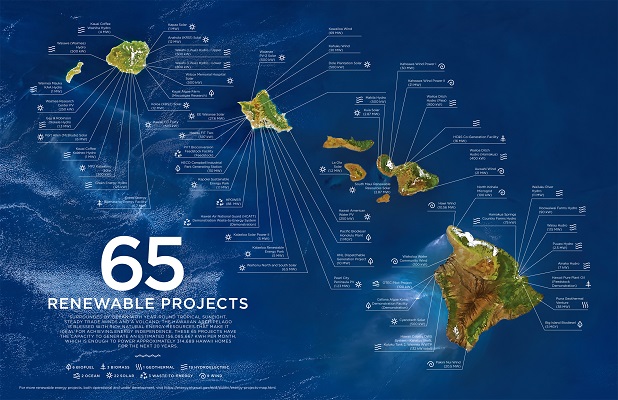 Just how it does that, while preventing overloads and brownouts, is being closely watched by other states. Hawaii provides a “preview” of what states might do as the United States moves faster toward renewable energy than many experts anticipated, according to a study released this week by the National Renewable Energy Laboratory. “If this can be done in Hawaii, it can be replicated anywhere else,” said Martha Symko-Davies, program manager for NREL’s Energy Systems Integration Facility.

The study shows that the use of “smart inverters,” switches that can automatically respond to potential overloads, help the grids handle the ups and downs of solar power. The growth of rooftop solar, long thought to be the wild card in controlling grids, “could actually be an asset for grid stability,” the study says.

But other states are finding their own reasons to hasten the pace toward renewable energy. The record-breaking enthusiasm for more solar and wind power among utilities and consumers is pushing the management of the nation’s electric power grids into uncharted waters.

Among the questions that worry modelers is how many coal and nuclear plants can survive the competition from renewables and still be around by 2030. They help control and back up the grid during periods of peak power demands. Another puzzle that Hawaii is exploring is whether large, reliable energy storage systems will emerge in time to store excess solar and wind energy at reasonable costs.

“Storage is a really critical piece of this puzzle,” said Chris Namovicz, the leader of EIA’s renewable energy analysis team. States that set high targets for renewable energy production present another puzzling question for modelers, he added. There are about 30 of them, led by Hawaii, New York and California, which plan to achieve 50 percent renewables by 2030.