In their reports on extreme events during 2017, Munich Re and Swiss Re have estimated worldwide natural catastrophe losses at around $330 billion dollars, the second worst on record. Losses from weather-related disasters were the worst ever, as a result of the hurricanes which hit the United States and Caribbean. It was also a record year for wildfires, and severe precipitation events that affected many regions, including parts of Europe.

Read the entire article at FERMA.

The reinsurers draw attention to the influence of climate change on the weather patterns, and the role of the risk manager in helping companies manage the risks and opportunities of climate change is a key topic on the programme of the 2018 FERMA Seminar in Antwerp from 8-10 October. 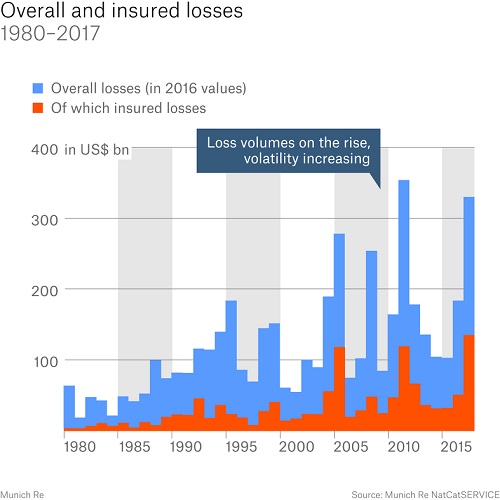 Munich Re says its loss statistics demonstrate the plausibility that climate change is already influencing some types of events in a number of regions. For example, losses caused by severe thunderstorms in Europe and North America have increased significantly.

Peter Hoppe, just retired as head of Munich Re’s Geo Risks Research/Corporate Climate Centre, wrote: “The top priority for the next few years and decades must be for societies around the world to adapt to the now already inevitable impact of climate change. Science offers increasingly precise information about the areas in which climate change is influencing weather extremes.” If research produces good results, he says, measures to prevent and adapt to the effect of climate change can be further tailored to protect people and property.”

The President of FERMA Jo Willaert says this is why FERMA has pressed the EU to facilitate wide public access to good quality climate-related data. “If organisations have an accurate view of their risks from exposure to climate-related events, they can take appropriate decisions in terms of prevention and protection and future projects. The business becomes more sustainable.”

Worldwide there is a large difference between catastrophe losses and insurance coverage, which is also a concern to corporate risk managers. Swiss Re says insurance covered close to $138 billion of the total economic losses from natural disasters in 2017, but only because so many of the events affected the United States. In Europe, according to Swiss Re, economic losses from catastrophe events in Europe in 2017 were $23.7 billion, of which only $12 billion was covered by insurance. Most of these losses came in periods of weather extremes, including a series of windstorms and a cold snap early in the year, and drought conditions and wildfires later.

Jo Willaert explains that the catastrophe protection gap illustrated by these figures is important not just to the individuals and small companies affected but also to large businesses. “Today’s global supply chains are so interdependent that if some parts of it fail because they cannot recover from a natural catastrophe, then it can have an impact on all of us.”