In a move that will delight anyone who raced slot cars as a kid, the Swedish Transport Administration has just opened a 2-km stretch of electrified road that works the same way. The project, dubbed eRoadArlanda, involves embedding electric rails into the road surface to power electric vehicles through a contact arm hanging down from under the car.

If electric vehicles are going to become mainstream, the infrastructure around them needs to be as convenient for drivers as possible. Charging stations are getting more common and more advanced, and we’ve seen other systems proposed that would top up cars on the go, like wireless charging lanes or Siemens’ eHighways that use overhead cables. 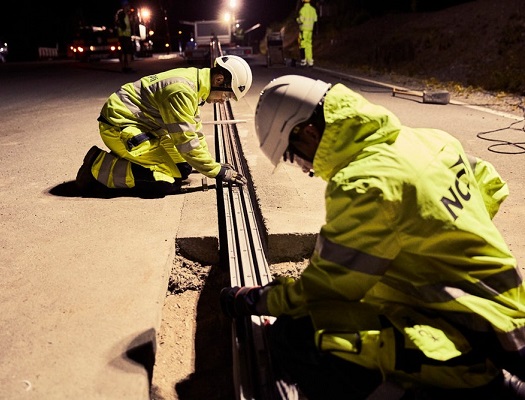 In the eRoadArlanda project, electricity from two parallel tracks in the road is fed into a vehicle through an arm attached to the underside of the car. The arm is retractable, and hooked up to sensors that tell it to only extend down when it’s above the rails. If the car needs to overtake or turn off the road, the arm folds back up out of the way and the vehicle draws power from its battery.

The tech has been designed to protect humans and animals that might walk across it. The track at the surface is earthed to prevent shocks, with the conductor itself buried deeper down – and even then only short sections are powered at a time, as vehicles pass over them. To get zapped, you’d need to be on your hands and knees jamming a fork between the rails, in which case the more immediate danger would be the car speeding towards you.

Rain isn’t a problem either. Drainage systems are in place along the track, and the contact arm has been designed to push water out of the way – as well as gravel, rocks and other small obstacles. The gap between the rails is too narrow to cause a problem for motorbike and bicycle wheels.

The ultimate goal is for the rails to complement the wider electric vehicle infrastructure. Only highways and arterials need to be electrified in this way. Vehicles can run on battery power on smaller streets and be recharged at home or other stations if needed. Rather than trying to combat range anxiety by developing bigger batteries, the project is reducing the length of the journeys between power sources to a distance that current electric cars can already manage.