The most important thing about the company’s big renewable push is that it’s bringing everyone (from suppliers to local utilities) along for the ride.

You have to see Apple’s Reno, Nevada, data center from the inside to truly understand how huge it is. It’s made up of five long white buildings sitting side by side on a dry scrubby landscape just off I-80, and the corridor that connects them through the middle is a quarter-mile long. On either side are big, dark rooms – more than 50 of them – filled with more than 200,000 identical servers, tiny lights winking in the dark from their front panels. This is where Siri lives. And iCloud. And Apple Music. And Apple Pay.

Powering all these machines, and keeping them cool, takes a lot of energy – constant, uninterrupted, redundant power. At the Reno data center, that means 100% green power from three different Apple solar farms. 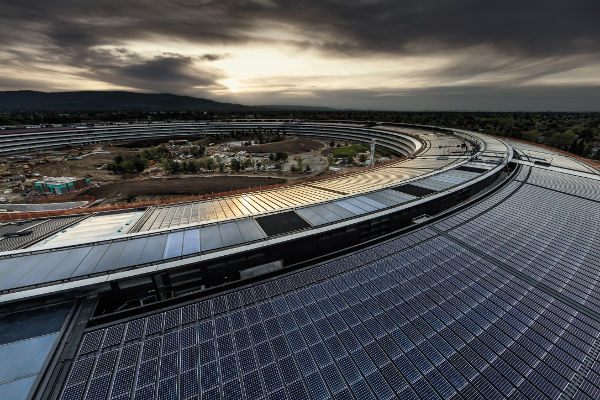 Apple says the rest of its facilities are running on 100% green power – from its new Apple Park headquarters, which has one of the largest solar roofs on the planet, to its distribution centers and retail stores around the world. Though the 100% figure covers only Apple’s own operations – not those of of the suppliers and contract manufacturers which do much of the work of bringing its ideas to life – it’s also convinced 23 companies in its supply chain to sign a pledge to get to 100% renewable energy for the portion of their business relating to Apple products.

The achievement is the culmination of a furious effort over the past six years that involved financing, building, or locating new renewable energy sources, such as solar and wind farms, near the company’s facilities. Apple says it now has 25 operational renewable energy projects – with 15 more under construction – in 11 countries. Just eight years ago, only 16% of its facilities were powered by renewable energy. By 2015 that number had increased to 93%, then to 96% in 2016. And now to 100%