A Purdue University professor is developing a way for farmers to capture solar energy without blocking the sunlight their crops need.

The solar collectors being developed by Chemical Engineering Professor Rakesh Agrawal and his colleagues would capture infrared radiation for energy production while letting visible light pass through to crops. 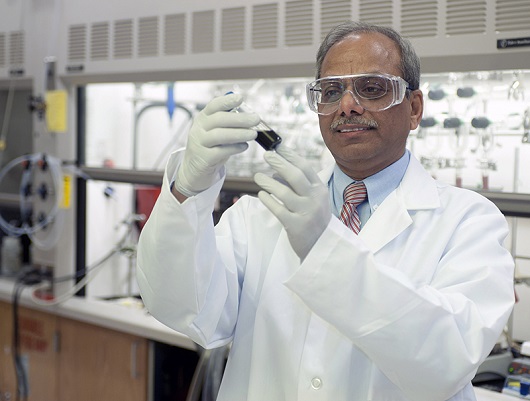 “We are going to build this structure on agricultural land. We have an agronomist who will grow corn and we will monitor the land and make sure we can produce electricity and grow food at the same time,” he said in Chicago Wednesday. “The day we figure out how to have food and energy coexist together, I think it is perfect.”

Winner of the 2011 National Medal of Technology and Innovation, Agrawal just received a $2.5 million grant from the National Science Foundation for a demonstration project.

“There are dozens of possible structures we can build. Some are cheaper than what is being done right now,” he said in a lecture at the Illinois Institute of Technology co-sponsored by the Chicago Council on Science and Technology. “It’s why we want to build these on the farm and do experiments and prove indeed this can be done. I think NSF has been very kind to give us the money to go and prove it. I’m pretty excited about it.”

Agrawal calculates that the United States would need to cover 4 to 6 percent of its land area with solar panels to meet all of its energy needs. “Almost all the states can meet their local needs with local photons,” he said.“This is big news, right? This is a big change from building $30 billion of power supply lines from the regions of the United States where there’s a lot of sunshine to the regions where there’s not.”

Agrawal believes such a system could meet the food, energy and water needs of a growing population because it uses both land and solar radiation more efficiently.