In their annual summary of global threats, the nation’s intelligence agencies warned that climate change and other environmental trends “are likely to fuel economic and social discontent, and possibly upheaval, through 2018.” 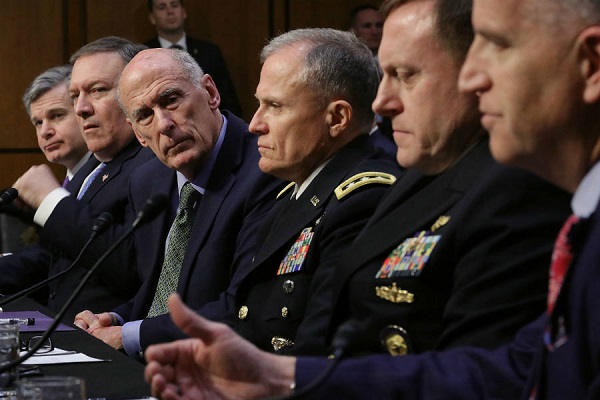 The trends are already visible, they said in a statement presented to the Senate Intelligence Committee at a hearing where the Trump administration’s top intelligence officials testified. The intelligence community aligned itself with science agencies. The report’s views reflect those in the thoroughly peer-reviewed interagency National Climate Assessment issued last year, and the facts consistently reported by major scientific agencies like NOAA and NASA.

“Extreme weather events in a warmer world have the potential for greater impacts and can compound with other drivers to raise the risk of humanitarian disasters, conflict, water and food shortages, population migration, labor shortfalls, price shocks, and power outages,” the intelligence threat assessment said. It was presented as the written testimony of Dan Coats, the director of national intelligence appointed by President Donald Trump.

“Worsening air pollution from forest burning, agricultural waste incineration, urbanization, and rapid industrialization (and increasing public awareness) might drive protests against authorities, such as those recently in China, India, and Iran,” the assessment said.

Water scarcity and disease outbreaks, two problems related to climate change, also pose risks, it said. So does the most striking sign of the upheaval, waves of refugees displaced by complex stresses of climate, disease, poverty and other destabilizing factors, the report warned.

“Challenges from urbanization and migration will persist, while the effects of air pollution, inadequate water, and climate change on human health and livelihood will become more noticeable,” the assessment said. “Domestic policy responses to such issues will become more difficult, especially for democracies, as publics become less trusting of authoritative information sources.”