As urban populations grow, more people find themselves in food deserts, areas with “limited access to supermarkets, grocery stores, or other sources of healthy and affordable food,” according to a report by the U.S. Department of Agriculture. New technologies are changing the equation, allowing people to grow food in places where it was previously difficult or impossible, and in quantities akin to traditional farms.

Read the entire article at Futurism.

Urban farms can be as simple as traditional small outdoor community gardens, or as complex as indoor vertical farms in which farmers think about growing space in three-dimensional terms. These complex, futuristic farms can be configured in a number of ways, but most of them contain rows of racks lined with plants rooted in soil, nutrient-enriched water, or simply air. Each tier is equipped with UV lighting to mimic the effects of the sun. Unlike the unpredictable weather of outdoor farming, growing indoors allows farmers to tailor conditions to maximize growth. 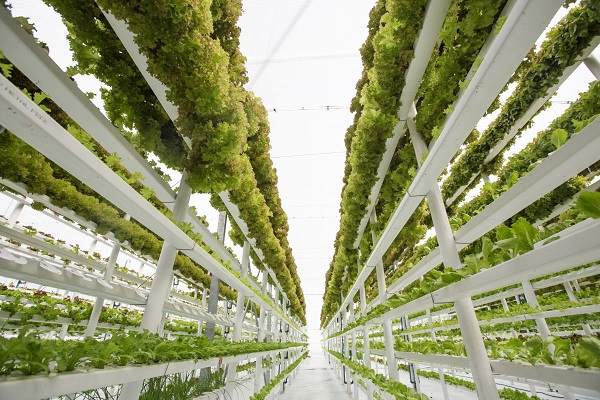 With the proper technology, farming can go anywhere. That’s what the new trend of urban farming shows — these farms go beyond simple community vegetable gardens to provide food to consumers in surrounding areas. All vertical farmers need is some space and access to electricity, no special facilities required. Farmers can buy everything they need to start and maintain their farms online as easily as shopping on Amazon.

“You have to look at these facilities in cubic feet as opposed to square feet. We can really put out a lot of produce from a facility like this,” Dave Haider, the president of Urban Organics, a company that operates urban farms based in St. Paul, Minnesota, told Futurism. Technology allows vertical farmers to control the environment in their farms, enabling them grow a lot more in the same amount of space, according to a 2014 study in the Journal of Agricultural Studies.

“Trying to put a dent in the industry when it comes to food deserts is really one of the driving factors behind our first farm, which was actually located in a food desert,” Haider said. Urban Organics sells its produce to local retailers and provides locally-sourced fish to nearby restaurants. “That was sort of our approach — let’s try to grow produce and raise high-quality protein in an area that needs it most.” As more people move to cities, problems like food scarcity might get even worse.

The vertical farm is also environmentally-friendly. Aquaponics systems result in very little waste. Vertical farming allows growers to use their finite area more efficiently, so we collectively can better utilize established space instead of creating more arable land, leaving more ecosystems intact. Placing the farms close to vendors and consumers means that fresher produce can reach tables with less reliance on trucks, which contribute to pollution and global warming.

This winning formula of bringing food and jobs to these areas can help build underserved communities. “Once that’s done, we get to go out to identify the next markets and then do it all over again,” Haider said. Urban farms have the potential to change the world’s agricultural landscape. Granted, we’re probably not going to see a planet of supercities in which all farming is done in high-rise buildings. But urban farms can bring greater yields in smaller areas, increase access to healthy options in urban food deserts, and mitigate the environmental impact of feeding the world. That seems like enough of a reason to continue to develop and expand these transformative farming practices.