Read the original article at electrek. 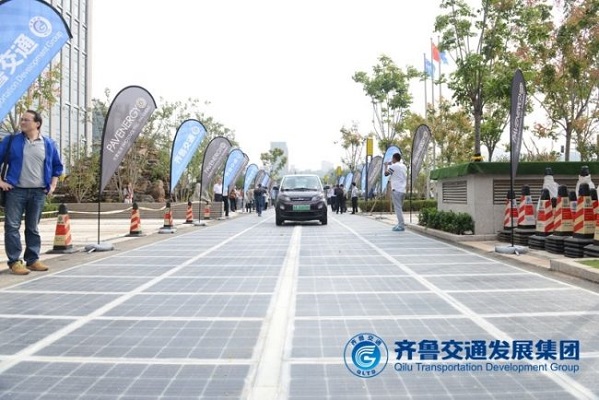 The Jinan City solar highway is formed with three layers. The top layer is a transparent concrete that has similar structural properties with standard asphalt. The central layer is the solar panels – which are engineered to be weight bearing. The bottom layer is to separate the solar panels from the earth underneath. The road is durable enough to handle vehicles as large as a medium sized truck. Wireless vehicle charging will soon be integrated, and automated car functions could take advantage of the inherent data in this already wired roadway.

Solar Roadways are being tested in multiple locations around the world:

The Netherlands was first to dip their toe in the solar roadway waters by building a solar powered bike path in 2014. France soon followed suit by building a solar roadway of their own. The project is in the Normandy village of Tourouvre-au-Perche. The 1 km (0.6 mile) long solar road installation consists of 2,800 sq meters of energy-producing panels. The system is expected to serve about 2,000 motorists a day. France has since set a very ambitious goal of installing over 1000 kilometers (621 miles) of solar roadways.

Infrastructure Integrated Photovoltaics (IIPV) are being found in more and more places. And as solar technology gets cheaper and more efficient, look for more examples: