The nation’s third-hottest year on record is now officially its costliest for billion-dollar natural disasters. Sixteen $1 billion-plus weather and climate-related events killed at least 362 people. The United States suffered its worst wildfire and hurricane seasons in modern history, according to a report released Monday by the National Oceanic and Atmospheric Administration.

The cost and death tolls are expected to climb as new data on Puerto Rico’s post-hurricane destruction emerge. The official body count after Hurricanes Maria and Irma ransacked the island territory and destroyed its electrical grid sits at 64, but an analysis by The New York Times pegged the figure at 1,052, and growing. 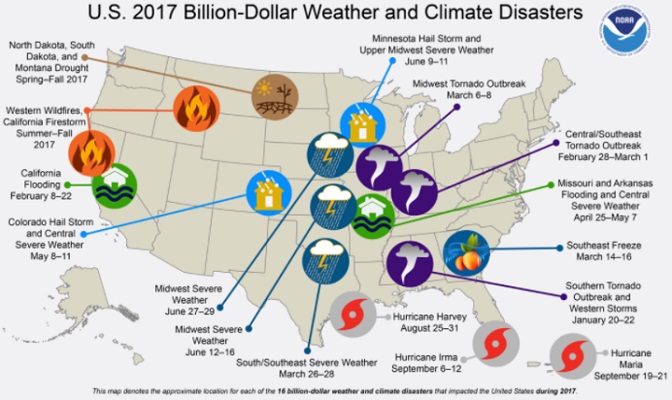 The new tally shattered the previous 2005 record of $215 billion, driven mostly by Hurricanes Katrina, Wilma and Rita. Hurricane Harvey, which made landfall over Houston in late August, is second only to Katrina in for record billion-dollar disasters.

Climate change has made weather events more destructive, with fiercer, more violent storms and prolonged droughts that transformed swaths of the west into tinderboxes, driving up the losses. But part of the problem is that more valuable properties are located on the coasts or near forests. NOAA officials said the analysis did not account for differences between those two factors.

Even with more accurate data, the report only offers a glimpse at the devastation caused by the disasters. “We do not take into account things like health care-related costs, destruction of natural capital, physical and mental distress,” Crouch said. “It could be stated that these costs are to the best of our ability but they are really a low point to the true total cost.”

The findings mirror larger global trends. Natural disasters cost insurance companies a record $135 billion in 2017, according to figures released last week by Munich Re, the world’s largest reinsurer. Counting uninsured losses, that figure climbed to $330 billion. The only costlier year was 2011, when the Tohoku earthquake in Japan contributed to a total of $354 billion. Disasters in the U.S. made up 50 percent of this year’s losses, the German company said, compared to 32 percent on average years.