Sequestering carbon in soil produces a triple dividend: it reduces climate change by extracting carbon from the atmosphere, it restores the health of degraded soil, and it increases agricultural yields.

The earth possesses five major pools of carbon. Of those pools, the atmosphere is already overloaded with the stuff; the oceans are turning acidic as they become saturated with it; the forests are diminishing; and underground fossil fuel reserves are being emptied. That leaves soil as the most likely repository for immense quantities of carbon. 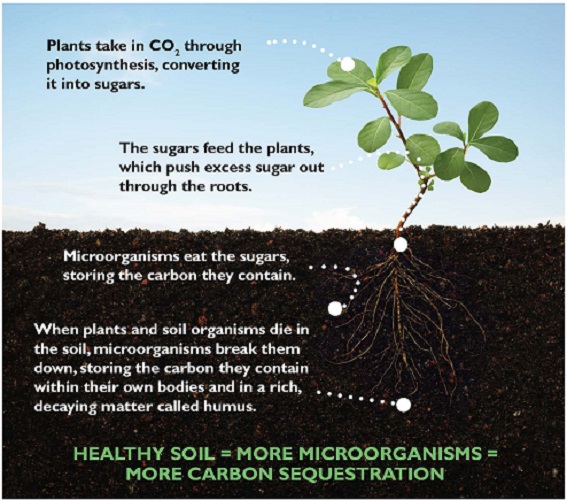 Many scientists and farmers believe the emerging understanding of soil’s role in climate stability and agricultural productivity will prompt a paradigm shift in agriculture, triggering the abandonment of conventional practices like tillage, crop residue removal, mono-cropping, excessive grazing and blanket use of chemical fertilizer and pesticide. Even cattle, usually considered climate change culprits because they belch at least 25 gallons of methane a day, are being studied as a potential part of the climate change solution because of their role in naturally fertilizing soil and cycling nutrients.

The climate change crisis is so far advanced that even drastically cutting greenhouse gas emissions won’t prevent a convulsive future by itself — the amount of greenhouse gases already in the atmosphere ensures dire trouble ahead. The most plausible way out is to combine emission cuts with “negative-emission” or “drawdown” technologies, which pull greenhouse gases out of the atmosphere and into the other pools. Most of these proposed technologies are forms of geoengineering, dubious bets on huge climate manipulations with a high likelihood of disastrous unintended consequences.

On the other hand, carbon sequestration in soil and vegetation is an effective way to pull carbon from the atmosphere that in some ways is the opposite of geoengineering. Instead of overcoming nature, it reinforces it, promoting the propagation of plant life to return carbon to the soil that was there in the first place — until destructive agricultural practices prompted its release into the atmosphere as carbon dioxide. That process started with the advent of agriculture about 10,000 years ago and accelerated over the last century as industrial farming and ranching rapidly expanded.

Until the advent of synthetics in the late 1800s, fertilizer consisted chiefly of carbon-rich manure or compost. But synthetic fertilizers contain no carbon, and as their use spread along with tillage practices to incorporate them, soil carbon content declined. The process accelerated after World War II, when America’s nitrogen-based munition plants were converted into nitrogen-based fertilizer factories. Most agricultural colleges still teach soil fertility chiefly as an exercise in applying inorganic chemical fertilizer, while overlooking soil’s biological role (and its carbon content).