Coastal communities from Maine to California have been put on notice from one of the top credit rating agencies: Start preparing for climate change or risk losing access to cheap credit.

In a report to its clients Tuesday, Moody’s Investors Service Inc. explained how it incorporates climate change into its credit ratings for state and local bonds. If cities and states don’t deal with risks from surging seas or intense storms, they are at greater risk of default. 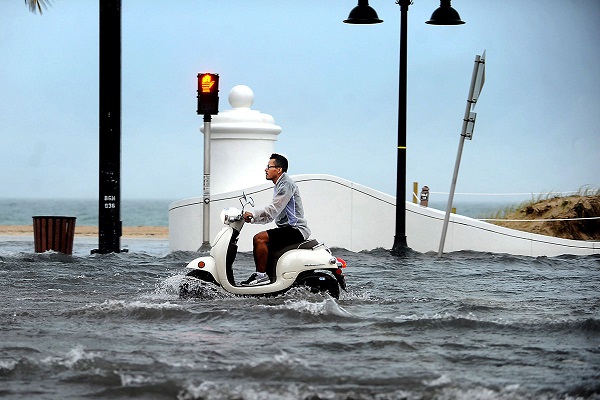 “What we want people to realize is: If you’re exposed, we know that. We’re going to ask questions about what you’re doing to mitigate that exposure,” Lenny Jones, a managing director at Moody’s, said in a phone interview. “That’s taken into your credit ratings.”

In its report, Moody’s lists six indicators it uses “to assess the exposure and overall susceptibility of U.S. states to the physical effects of climate change.” They include the share of economic activity that comes from coastal areas, hurricane and extreme-weather damage as a share of the economy, and the share of homes in a flood plain.

Based on those overall risks, Texas, Florida, Georgia and Mississippi are among the states most at risk from climate change. Moody’s didn’t identify which cities or municipalities were most exposed.

Eric Glass, a fixed-income portfolio manager at Alliance Bernstein, said real transparency required having a separate category or score for climate risk, rather than mixing it in with other factors like economic diversity and fiscal strength. Still, the new analysis is “certainly a step in the right direction,” Glass said by email. Others worried that Moody’s is being too optimistic about cities’ desire to adapt to the risks associated with climate change.

Rob Moore, a senior policy analyst at the Natural Resources Defense Council, said increased attention from rating agencies could push cities to reconsider where they build. “If I was a city official, I’d be asking a whole lot of questions about what vulnerabilities their community has, and how each new proposed development adds to that vulnerability,” Moore said in an email. “Because at some point, your creditors certainly will.”