Driverless vehicle use worldwide could lower traffic congestion and emissions contributing to climate change by 50 percent or more in 2050, according to a 2017 report led by global transport expert Lewis Fulton at the Institute of Transportation Studies at UC Davis.

In an ideal driverless future, parking lots and driveways are converted to housing, cafes, open space and gardens. Roads are safer – robots don’t eat, drink, text or sleep – and seniors, people with disabilities and even children have far greater mobility. Drunk drivers cease to be a problem, and transportation cost is a fraction of what it once was. People can work, sleep or watch a movie while in transit. 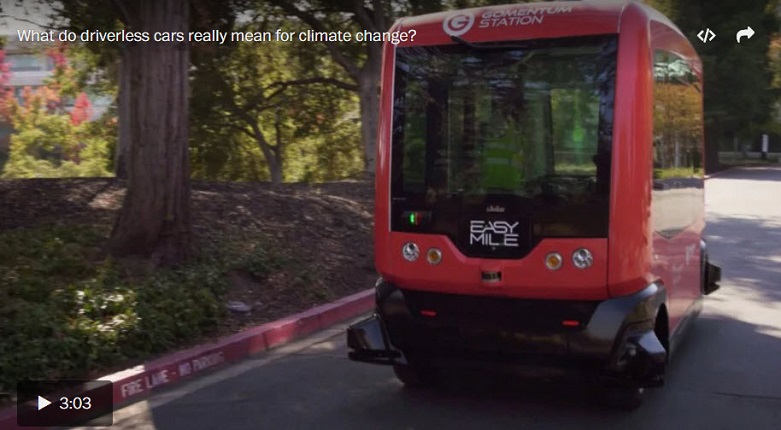 But for this scenario to work, something major has to happen: Large numbers of people have to give up their cars and start sharing rides. Fulton’s analysis found little societal or environmental benefit from driverless vehicles unless they are both electric and shared. “All the futuristic automotive technology being developed could make our cities more livable and the air more breathable,” Fulton said. “But only if we take sharing seriously.”

That’s because cars would become a service rather than something people own. Pooling services and app-based, ride-sharing companies could expand to accommodate multiple riders in one vehicle, whether a car, van, small shuttle or bus. These services eventually would become driverless.

Ride-sharing company Lyft expects driverless vehicles to account for most of its rides within five years. Some transportation experts are more conservative, estimating that widespread adoption of sit-back-and-take-a-nap driverless vehicles will likely take another 20 to 40 years. But most agree it’s a matter of when, not if.

“A future with driverless cars is inevitable because it will be cheap, safe and people will want it,” said ITS-Davis director Dan Sperling. “Most of the technology is already here. Now we want to make sure, before we get too far, that these driverless cars are powered by electricity and used for pooling services, not individually owned.”

In 2016, ITS-Davis launched its “3 Revolutions” policy initiative, which lays the scientific foundation for a future with driverless vehicles embracing all of the characteristics (driverless, electric and shared mobility) needed for the greatest environmental and public benefit.