Study concludes that the methane emissions escaping from New Mexico’s gas and oil industry are “equivalent to the climate impact of approximately 12 coal-fired power plants.”

If the goal is to avoid catastrophic levels of warming, a recent report by U.K. climate researchers finds “categorically no role” to play for new natural gas production. 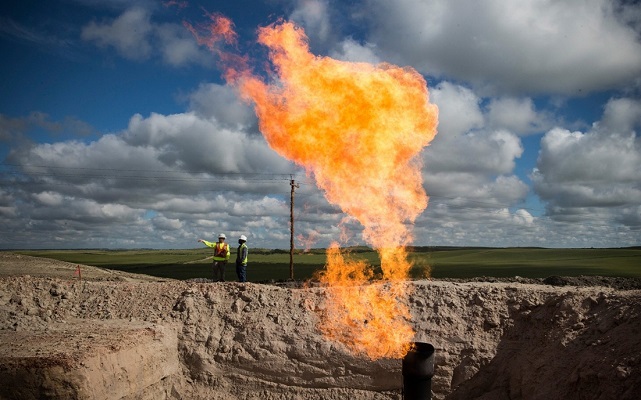 In the real world, natural gas is not a “bridge” fuel to a carbon-free economy for two key reasons. First, natural gas is mostly methane (CH4), a super-potent greenhouse gas, which traps 86 times as much heat as CO2 over a 20-year period.

That’s why many studies find that even a very small leakage rate of methane from the natural gas supply chain (production to delivery to combustion) can have a large climate impact  —  enough to gut the entire benefit of switching from coal-fired power to gas.

Second, other studies find   natural gas plants don’t replace only high-carbon coal plants. They commonly replace very low carbon power sources like solar, wind, nuclear, and even energy efficiency, which is often overlooked as a major alternative to fossil fuels. That means even a very low leakage rate wipes out the climate benefit of fracking.

Indeed, researchers confirmed in 2014 that  —  even if methane leakage were zero percent  — “increased natural gas use for electricity will not substantially reduce US GHG [greenhouse gas] emissions, and by delaying deployment of renewable energy technologies, may actually exacerbate the climate change problem in the long term.” In fact, a 2016 study found that natural gas and renewables are competing directly with each other to replace coal plants in this country.

So it’s no surprise that the new analysis by researchers at the Tyndall Centre for Climate Change Research finds that “there is categorically no role for bringing additional fossil fuel reserves, including gas, into production.” The scientists explain that we have simply dawdled too long, and if we are to have any plausible chance of staying below 2°C, carbon dioxide emissions need to be driven to near zero levels by mid-century, particularly for the industrialized countries who have historically generated the most cumulative carbon pollution.