Read the entire article at the National Geographic.

Extreme weather, made worse by climate change, along with the health impacts of burning fossil fuels, has cost the U.S. economy at least $240 billion a year over the past ten years, a new report has found. 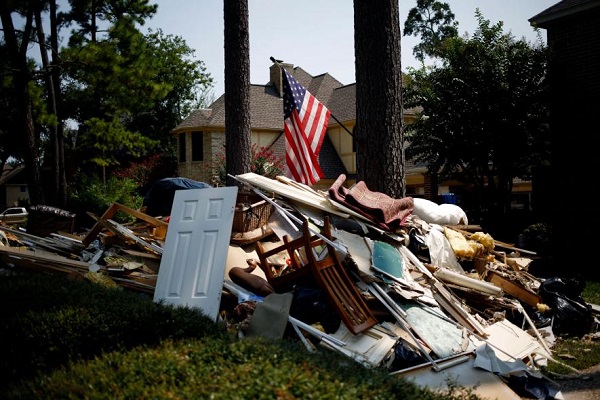 And yet this does not include this past month’s three major hurricanes or 76 wildfires in nine Western states. Those economic losses alone are estimated to top $300 billion, the report notes. Putting it in perspective, $300 billion is enough money to provide free tuition for the 13.5 million U.S. students enrolled in public colleges and universities for four years.

In the coming decade, economic losses from extreme weather combined with the health costs of air pollution spiral upward to at least $360 billion annually, potentially crippling U.S. economic growth, according to this new report, The Economic Case for Climate Action in the United States, published online Thursday by the Universal Ecological Fund.

“We want to paint a picture for Americans to illustrate the fact that the costs of not acting on climate change are very significant,” Watson, the former chair of the Intergovernmental Panel on Climate Change, told National Geographic. Watson is quick to point out that extreme weather events, including heat waves, hurricanes, wildfires, and droughts, are not caused by climate change. However, there is no question their intensity and frequency in many cases has been made worse by the fact the entire planet is now 1.8 degrees F (1 degree C) hotter, he said in an interview.

While a 1.8 degree F (1 degree C) increase may seem small, it’s having a major economic impact on the U.S. According to data provided by the National Oceanic and Atmospheric Administration (NOAA), the number of extreme weather events causing at least $1 billion in economic losses has increased more than 400 percent since the 1980s. Some of that increase is due to increased amounts of housing and commercial infrastructure along coastlines. “However that doesn’t account for big increases in the last decade,” Watson said.

And much more global warming is coming—3.6 degrees F (2 degrees C) temperature by 2050 and even greater warming beyond that—unless bigger cuts in fossil-fuel emissions are made than those promised in the 2015 Paris Climate Agreement, said Watson. “The impacts of climate change are certainly going to get more than twice as bad,” he said.