Read the entire article at Futurism.

A new study indicates that warming temperatures caused by climate change may be releasing heat-trapping methane from layers of gas and oil that’s been lurking beneath the Arctic permafrost for thousands of years. Until now, anyway. As the permafrost melts, millions of tiny openings are created, and some of these greenhouse gases rise to the surface, escaping into the atmosphere. 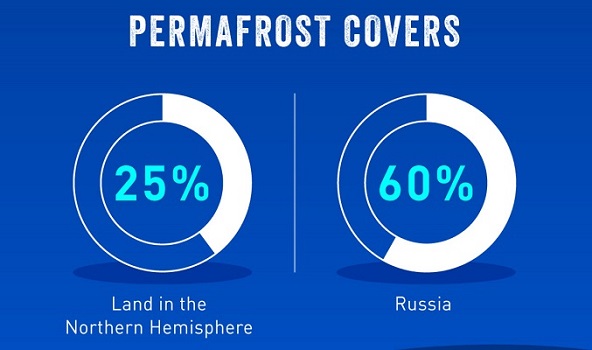 Scientists sampled air in different parts of the atmosphere to detect sources of methane emerging from beneath the permafrost in northwestern Canada along the Mackenzie River Delta. The 10,000 square-kilometer area has long been known to have gas and oil deposits. Their findings indicate that pockets in the permafrost that have deeply thawed are responsible for 17 percent of all measured methane in the region. What’s more staggering is that these hotspots for emissions comprise just 1 percent of the permafrost’s surface area.

Bacterial decomposition is commonly found in permafrost, and typically causes peak concentrations of methane emissions that are far lower than those seen in this case — which were about 13 times higher than average. This higher level of emissions indicates that there are also geological sources of the methane, such as gas and oil. The scientists concluded that global warming will continue to open new pathways for greenhouse gas emissions as it causes the permafrost to thaw, which in turn feeds the carbon-climate feedback loop.

It’s not yet clear how rapidly climate change will trigger methane releases, or in what amounts greenhouse gases will invade the atmosphere. Scientists are also concerned that melting permafrost may lead to the revival of viruses that haven’t been active for thousands of years. Experts around the world are issuing dire warnings, making it clear that the planet we know and love will not be the same if we don’t act now.

Automated Buses Will Reshape Our Cities