Automated Buses Will Reshape Our Cities

When a short trial of an autonomous bus first ran in Helsinki, Finland, in 2016, most riders saw it as a novelty. But by this fall, if you work in downtown Helsinki, you might start riding the city’s robo-bus as part of your daily commute. The city is one of a handful to launch a longer-term trial of the technology, running along a regular bus route. 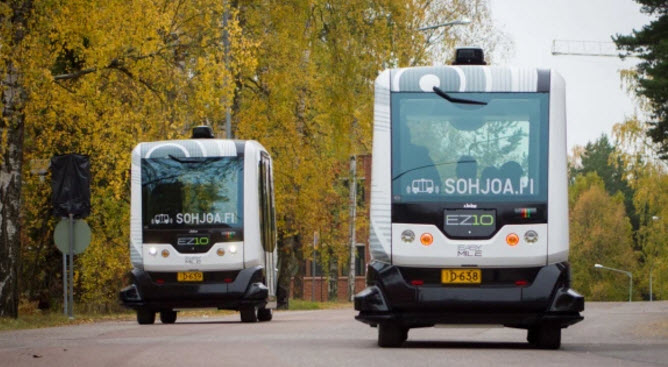 The tiny bus, which can hold 12 passengers and travels at a sedate seven miles an hour, runs on electricity. If someone cuts in front, it stops itself; like other autonomous vehicles, it holds the promise of reducing or even eliminating traffic deaths. In trials, a human is on board in case of emergency, but in a driverless future, it will be cheap enough to operate that it can fill in transit gaps, helping people drive less. That time may be nearly here; cities just have to take a few more steps to understand how the technology can best be used.

There are challenges, particularly from other drivers. The machine always follows traffic rules, and people often don’t. Drivers don’t yet know how to interact with the vehicles. Cities have to figure out how their infrastructure should adapt. An autonomous bus could potentially drop off passengers directly where they need to go, like Uber, but that might also require new space for stops. Roads might work better with a new lane for the buses. Technology like traffic lights could be connected directly with the buses’ operating system.

Las Vegas ran a short trial of an autonomous electric shuttle in January 2017, running back and forth along a three-block route for 10 days, and plans to launch a second trial, likely connected to its traffic lights, in late summer or early fall. Nevada allows fully autonomous vehicles on roads. While the federal government is still working on its own regulations, Joanna Wadsworth, program manager for the transportation engineering division at the City of Las Vegas’s Department of Public Works thinks that it may be “a year or two, if not sooner” before autonomous shuttles have regular permanent routes in the city.

The technology is still developing, and the trials will help manufacturers refine how the vehicles deal with challenges like weather (lidar, a laser system that acts as a sensor, struggles in snow, for example). But Navya, a French company that manufactures the electric shuttle being tested in Las Vegas, believes that the technology is essentially ready, and cities are also ready to begin testing it en masse.