Climate change is driving up the number of forest fires ignited by lightning, and it’s pushing them farther north, to the edges of the Arctic tundra, researchers say. 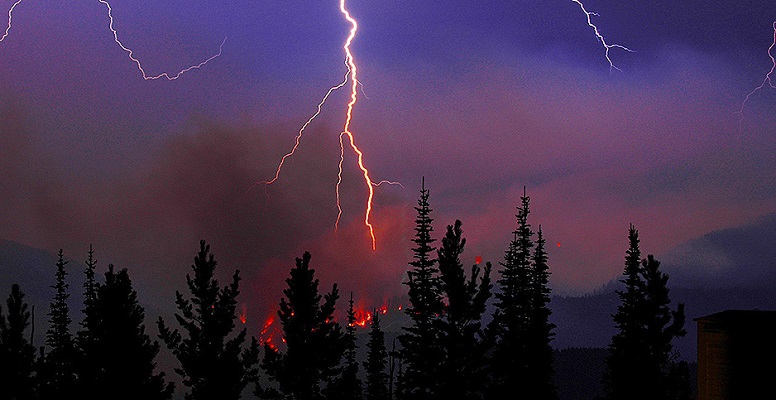 Lightning-caused fires have risen 2 to 5 percent a year for the last four decades, according to a paper published yesterday in the journal Nature Climate Change. And as thunderstorms intensify and become more frequent, fires are increasingly occurring in the boreal forests, and even on the permafrost tundra. Warmer temperatures encourage more thunderstorms, which in turn bring more lightning and greater fire risk.

The changes are part of a complex climate feedback loop that is only now becoming more clear to scientists, said Sander Veraverbeke of Vrije Universiteit Amsterdam, the study’s lead author. A feedback loop is a series of interrelated phenomena that is worsened by climate change and continues to build upon itself with additional consequences. In the north, fires release more carbon dioxide and methane from the permafrost, he said.

“You have more fires; they creep farther north; they burn in these soils which have a lot of C02 and methane that can be exposed directly at the moment of the fire and then decades after,” Veraverbeke said. “That contributes again to global warming; you have again more fire.”

Scientists studied a spike in fires caused by lightning strikes in the Canadian Northwest Territories in 2014 and in Alaska in 2015. Because there is so little human activity in both of those regions, researchers traced the fires in remote areas to lightning strikes.

Scientists have previously connected climate change to an increase in lightning. For every degree Celsius of warming, lightning strikes are estimated to increase 12 percent, according to research published in the journal Science in 2014. Based on projected warming, that could mean a 50 percent increase by the end of the century. There are currently about 20 million lightning strikes over the continental United States, and about half of all wildfires are now traced to lightning strikes.