Heat waves are nothing new, but they have increased in frequency and severity in recent decades as a result of climate change. And each extreme heat event reveals another way our society simply isn’t built for such high temperatures, from our transport systems to the agriculture industry. 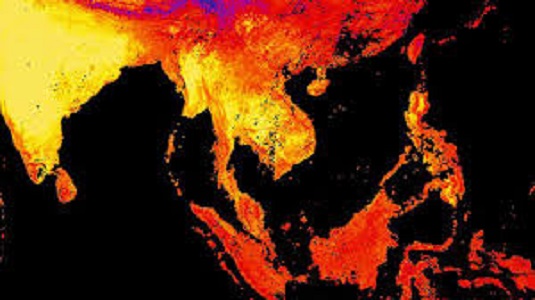 “We’ve built entire infrastructures with particular temperatures in mind,” says Matthew T. Huber, an associate professor of geography at Syracuse University. “When temperatures get really high, we don’t have the material capacity to deal with that.”

Still, humans continue to relocate to warm places like the Southwest, drawn by the temperate climate. In the coming decades, many climate researchers expect that pattern to reverse, as those once-desirable locations become too hot, flooded or otherwise uninhabitable. In some locations, particularly in the West, people will soon need to decide whether to rebuild for the new reality — or relocate elsewhere.

Humans have constructed essentially every element of the modern transportation sector to operate under certain temperature conditions. Airplanes cannot safely take off under extreme heat conditions that affect how the engine operates. Amtrak monitors temperatures closely and reduces the speed of trains when it gets too hot. Roads and highways can buckle as concrete expands.

Human society relies on agriculture that has become increasingly vulnerable to extreme heat, which can wreck a season’s crop and kill off livestock. Global warming reduced crop yields by as much 20% between 1964 and 2007, according to a study in the journal Nature. And, even when crops can survive high temperatures, humans will increasingly be unable to safely work in the fields to farm them.

It’s no secret that humans cannot withstand extreme temperature conditions. Heat stroke can occur when extreme heat drives body temperatures to exceed 104°F (40°C), which can lead to a number of ailments or even death. Some places — think most cities in the Middle East, as well as Southwest population centers like Phoenix — have been constructed with this in mind. In those cities, humans hop from place to place rarely ever leaving air conditioning, thanks to climate-controlled public transit. But researchers warn that heat waves in the coming decades may lead to sustained temperatures that mean people can essentially never go outside.