Google gathers images for its street view application by sending cars with cameras to drive through cities and towns. Karin Tuxen-Bettman of Google says some of these cars have been given an additional mission. “While the street view car’s driving around capturing 360-degree imagery of all the public roads it drives on, it’s also capturing methane concentrations.” 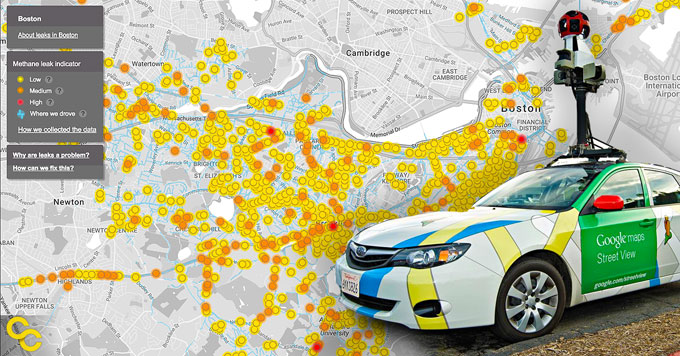 Methane is the primary component of natural gas. And it’s a global-warming gas. In the short term, methane is 84 times more potent than carbon dioxide. As natural gas pipelines in our cities age, they often leak. As a result, methane seeps up through the ground and adds to global warming.

To help reduce the problem, Google partnered with the Environmental Defense Fund and equipped its cars with a system that measures and maps concentrations of methane in the air. Tuxen-Bettman: “It sizes the leak and helps utilities prioritize based on that.”

New Jersey’s largest utility used the data to find and replace its leakiest pipes. That reduced methane emissions in its target areas by 83 percent. Tuxen-Bettman says the project is expanding. And emissions could continue to fall as more cities identify and fix leaky pipes.