Clean energy continues to overtake fossil fuels as the main source of new energy investments around the world. About 70 gigawatts of new solar generation and 59 gigawatts of new wind power came online in 2016. This amounts to $287 billion in new clean energy investments in 2016, according to Bloomberg New Energy Finance. We can see the fruits of these investments in key countries around the world, including India, China, Chile and Mexico. 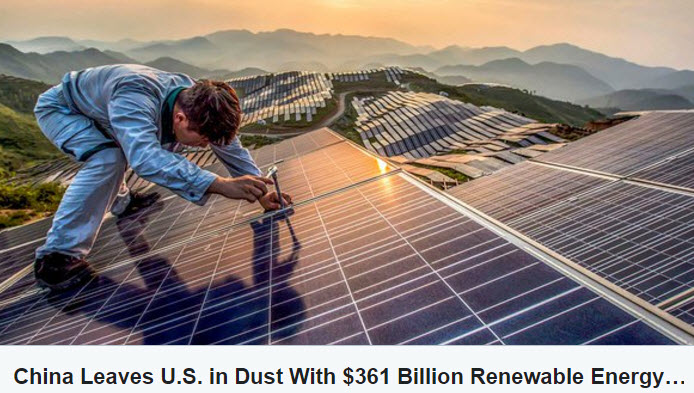 Solar power in India is becoming increasingly cost-effective and rapidly scalable. In 2016, the country commissioned the largest solar plant in the world at 648 megawatts and it was built in a mere eight months—that’s much quicker than the three to four years it takes to build a similar-size coal power plant. This month, an even bigger solar plant of 750 megawatts attracted record low bids of about $0.04/kWh, validating the government’s decision to cancel four coal power plants and effectively choose solar as the preferred energy source for meeting India’s rising energy demands.

China vaulted to the top of the world in solar power capacity in 2016, passing Germany, which had been the long-standing leader. The country added more than 34 gigawatts of solar capacity last year—nearly 1.5 times the amount the U.S. has installed in its entire history. China also installed more than 23 gigawatts of wind power in 2016, almost three times as much as the U.S. added that year. As the world leader in renewable energy investment, China put almost $88 billion into renewables in 2016—one-third more than the U.S.

Latin America has recently proven itself to be a regional powerhouse in clean energy. Three out of the top five developing countries for clean energy are in this part of the world: Chile, Brazil and Uruguay. In 2016, energy auctions in Chile and Mexico set record-low prices for renewables. Chile’s auction set the world’s lowest price for solar power at $0.03/kWh—half the price of coal in the same auction. And Mexico’s auction resulted in contracts for the addition of five gigawatts of new clean energy. That’s equivalent to the current electricity consumption for all of Mexico City.

You can read the full article on EcoWatch.