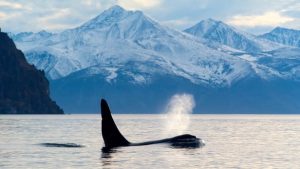 “The bigger you are, the tougher you’ll find it to survive in the ocean. This is the somewhat counter-intuitive conclusion of a new study examining the extinction threat levels of marine animals. It found that larger-bodied creatures are at a greater risk, a pattern never seen before on Earth and most likely the result of our growing appetite for seafood. Led by Jon Payne, an environmental scientist at Stanford University, a team of researchers set out to explore the relationship between the ecological traits of certain marine animals and their threat of extinction, as assessed by the International Union for Conservation of Nature (IUCN). Payne tells us that their study included information for more than 2,400 mollusk and vertebrate genera, and compared extinction patterns over the last 500 years with the ancient past, as far back as 445 million years.

“We used the fossil record to show, in a concrete, convincing way, that what is happening in the modern oceans is really different from what has happened in the past,” said study co-author Noel Heim, a postdoctoral researcher in Payne’s lab. “What our analysis shows is that for every factor of 10 increase in body mass, the odds of being threatened by extinction go up by a factor of 13 or so. The bigger you are, the more likely you are to be facing extinction.” Among the species looked at were the blue whale, great white shark and giant reef clam. While Payne and his team didn’t evaluate the chances of extinction for any particular species (as they’d already been assessed by the IUCN), they found that the probability of being listed as threatened increased substantially with body size. And while their study didn’t focus on the exact reasons for this pattern either, they say that a growing body of scientific evidence suggests there can be little doubt about who is to blame.”