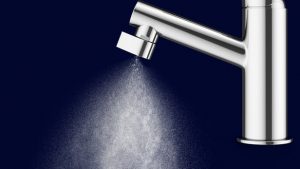 “When you wash your hands or rinse off soapy dishes under a running tap, most of the water just flows out of the faucet and down the drain without being used – or at least, that’s what the folks at Swedish firm Altered tell us. That’s why they created the Altered:Nozzle, which atomizes tap water into a fine mist. According to the company, the result is a 98 percent reduction in water use, with no loss in functionality. Described as “the world’s most extreme water-saving nozzle,” the brass-bodied device is simply attached to the end of an existing faucet in about 30 seconds.

When set to its Mist mode, it uses 0.18 liters (.05 US gallons) of water per minute. Although only about 2 percent the flow rate of an unadorned tap, the increased surface area created by the high-speed mist reportedly allows it to perform tasks such as washing and rinsing just as effectively. Filling a glass with water in that mode, however, takes two or three minutes. Because of that, the nozzle can be switched over to a Saver mode, which is still more efficient than using no nozzle at all, but that increases the flow rate to 3 liters (0.8 gal) per minute. If you’re interested, the Altered:Nozzle is currently the subject of a Kickstarter campaign. A pledge of 324 krona (about US$38) will get you one, when and if they reach production. And if you’re thinking that someone should apply the same idea to a shower head – well, that would be the Nebia Shower.”