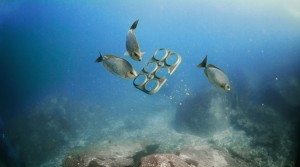 Drinking beer to save ocean life? Cheers to that. Saltwater Brewery in Florida has partnered with the New York-based ad agency We Believers to create a plastic-free six-pack ring that feeds marine life, rather than choking or ensnarling them. The Edible Six Pack Ring is made from byproducts of the brewing process such as wheat and barley, making it the first 100 percent biodegradable, compostable and edible packaging implemented in the beer industry.

“‘The best research currently available estimates that there are over 150 million tonnes (165 million tons) of plastics in the ocean today,’ [a] report reads. ‘In a business-as-usual scenario, the ocean is expected to contain 1 tonne (1.1 tons) of plastic for every 3 tonnes of fish by 2025, and by 2050, more plastics than fish (by weight).’

In other words, in just 34 years, plastic trash in the ocean will outweigh all the fish in the sea.”