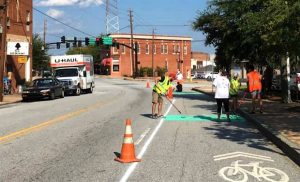 Read the full article online at https://nextcity.org   “How do you get a city more accustomed to biking trails to pedal the streets? Paint a whole lot of lanes. Macon, Georgia, population 150,000, was able to increase cyclist counts nearly tenfold during a one-week pop-up bike network, which at 8 miles, may have been the largest such […] 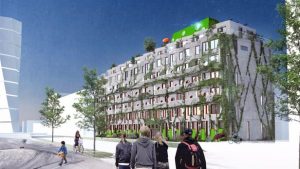 As cities seek to become greener and healthier places to live, cycling is increasingly being catered for. In Malmö, Sweden, this now extends beyond infrastructure like bike lanes and cycle paths, with a specially designed apartment block and hotel being built for people who wish to lead a car-free lifestyle. Designed by architects Hauschild+Siegel, Cykelhuset Ohboy will comprise 55 apartments, ranging in size from one to four bedrooms, and a “bike hotel” on street-level with 31 mezzanine apartments, all spread across seven floors. Like Foster + Partners’ 250 City Road in London, UK, it will feature space for bike storage, large elevators to accommodate bikes and a bike workshop, as well as focusing on greenery and sustainability.

A Superhighway for Bikes

“Germany, the country that invented the modern highway for motor vehicles, is taking on the challenge of keeping bikers safe and enabling them to easily commute long distances. It opened a three-mile-long leg of the Radschnellweg, a new autobahn for bikes, just before the New Year.

Instead of forcing riders to avoid swerving vehicles on a busy street, the Radschnellweg is a dedicated multi-lane highway for two-wheeled transport. The bike lanes are about 13 feet wide, are lit at night, and, like a road for cars, will be plowed during winter to remove snow.”