When does the will to collectively face our climate emergency trigger a global mobilization that is up to the task? Americans often refer to the unprecedented ramp up at the beginning of WWII as an example of how quickly we can come together and defeat a common enemy. Can we move fast enough?

In “Moving to a Finite Earth Economy” we recommend passing legislation to set up a mandatory national service to be focused solely on the climate crisis. When oil is no longer valuable, we can free up a significant piece of the Defense budget to pay for this. By 2030, we will no longer need to protect oil as a strategic asset. If you don’t believe me, read this “2019 US Army War College Implications of Climate Change” report.

Historic strikes and protests by the youth of the world… millions of them, comprise a potent new social movement. These young climate strikers understand that their futures are at stake, so they are protesting the failure of the world’s governments to effectively address our climate crisis. Without a way to mobilize their passion in the long-term, the momentum they’ve generated for climate action could be lost.

We can directly channel the energy of young people into climate action with a national service for the environment. 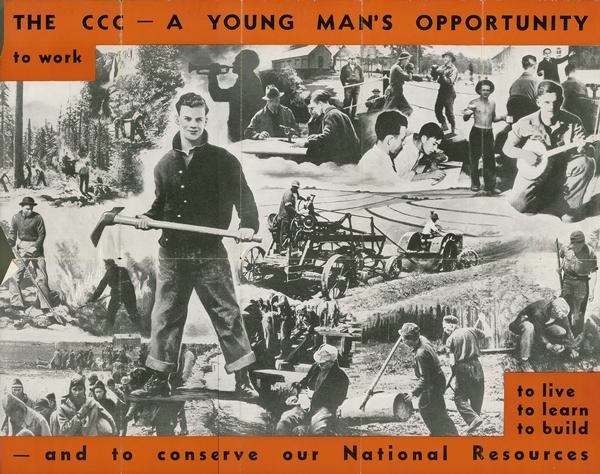 The idea of enlisting millions of young people in conservation work is not new. It has origins in a public work program from the 1930s. During the depths of the Great Depression, US President Franklin Roosevelt implemented a series of reforms as part of the New Deal. One of those reforms was the creation of the Civilian Conservation Corps (CCC). It enlisted three million young men who planted over two billion trees on more than 40 million acres of land between 1933 and 1942. Their aim was to repair ecosystems throughout the US with hundreds of projects in forestry and conservation. Reviving the program could provide the vehicle to mobilize the climate strike generation and directly address our emergency.

Dropping the program’s legacy of racial segregation, and gender non-inclusion, a modern CCC could mobilize young people around the world. A modern army of conservationists could be deployed in every country, adjusting their efforts according to the environmental needs of each setting. A volunteer force of older conservationists could transfer knowledge to the young.

This Crew is focused on conserving and restoring natural habitats. They would be deployed anywhere and in any way that restores nature. They could help farmers transition their land used for mono crops to land that is prepared for intercropping. Crews could be deployed to transform large vacant areas in cities to greenfield parks and gardens. Volunteers could be trained to test water quality and take an active role in monitoring pollution and local aquatic life.

This Crew focuses on the clean-up of plastics, cigarette butts and any waste that has made its way into natural habitats. Countries that have ocean shorelines can clean their beaches, and out to the 12 nautical miles mark of international waters. There will be a hazardous materials group that restores toxic areas back to natural health.

This Crew will plant trees anywhere and everywhere. They will install any new technological carbon capture devices in the most strategic places possible. A new GHG emissions-based tax code will require the monitoring of emissions. Large carbon offsets will be essential as an integral part of the tax scheme.

This crew is responsible for retrofitting buildings and installed infrastructure to increase energy efficiency. They could start with all national government buildings, then move to the state and local levels of government. For every ton of cement manufactured and used in traditional construction, approximately a ton of carbon dioxide is released into the atmosphere. Building new infrastructure which uses zero carbon materials would be another task for volunteers. Their work in the private sector could be partially paid for by businesses that would then receive tax rebates or credits for funds spent.

Byproduct benefits from these Crews could solve multiple social and economic problems:

Different countries will have different agendas. Poorer countries facing sea level rise might prioritize coastline restoration and infrastructure projects to support the inevitable migration of citizens inland. Other countries, whose agricultural production is declining due to changing weather patterns, might focus on countrywide replacements of current crops to ones that thrive in higher temperatures… whatever is appropriate and relevant for that country.

For humanity to have a future at the end of this century, massive effort at the nation state level is crucial. Young participants in the program would develop valuable knowledge and skills. Working in nature has a positive impact on wellbeing and participants would also benefit from a healthy dose of exercise.

All of the above are major undertakings. I know it can be done if we have the political will. How do we get from here to there? I think we start at the voting booth. What do you think?

What Did You Do Once You Knew?