It Takes a Village to Change the System

An amazing diversity of actors contributes to the healing of our planet. This became apparent to me as I made the final revisions to my book Our Environmental Handprints: Recover the Earth, Reverse Global Warming, Reclaim the Future. Consider for example the cast of characters who are reviving the Los Angeles River.

One winter night in 1986, Lewis MacAdams and two other people cut through a chain link fence that separated the concrete “flood control channel” from its adjacent urban wasteland. The channelization of what was the Los Angeles River was an earlier generation’s response to flooding. MacAdams and his cronies declared the Los Angeles River “open to the people.” This was an act of civil disobedience. Not many of us go there, but it plants an idea.[i]

Three years later, ten thousand people helped clean up that ditch and were invited to imagine an actual river that supports life and provides shade. The obscure non-profit Friends of the Los Angeles River (FoLAR) gained credibility. Volunteers, willing to spend a few hours getting dirty, give the mission legs to move forward.

At some point FoLAR raised $1 million to finish an Army Corps of Engineers study that had been languishing for years. The money was not forthcoming from typical government sources. The study proposed a plan that would both protect the city from flooding and provide community-accessible green space. The Corps eventually budgeted funds to remove several miles of its own concrete. An unusual partnership formed – donors, the federal government and its engineers.[ii] 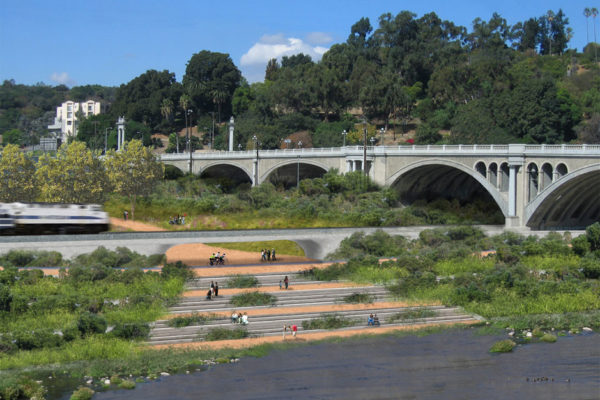 That study provided the foundation for the 2016 Los Angeles River Restoration Project. This included the LA River Bikeway and Greenway. Originally 7 miles long, it was extended to 13 miles. Bureaucrats and public testifiers pick up their roles in serving the greater good. [iii]

On January 13, 2021, Los Angeles County released its draft update of the Los Angeles River Plan. The plan separates “system-based” projects which apply to the whole river, and “site-based projects” which account for local circumstances. It acknowledges works already underway and identifies 22 new major projects involving all 17 cities along the 51-mile length of the river. This includes a land bank (or equivalent) to purchase nearby properties to provide low-cost housing. It also includes 208 smaller projects such as benches and kiosks. [iv]

Lewis MacAdams died on April 20, 2020, but the work he started moves forward in the capable hands of a world class city that has fallen in love with his vision.

The trajectory from citizen activism to institutional implementation, appears again and again in Our Environmental Handprints.

Insights from the Index

I spent most of a month compiling an index for my book. The quantity of entries, in an array of categories, confirms that environmental leadership comes in lots of different forms, from diverse people and organizations.

The index has 82 people, 207 non-profits, 108 businesses, 38 cities, 15 states, 43 nations, 20 federal laws, and 12 United Nations agreements. These are only the examples I selected to make a point in a given chapter. Non-profits advocate and organize. Businesses demonstrate, monetize and scale. Cities involve citizens and institutions. States establish precedents for transformation. Nations show us what is globally possible. Legislation and treaties are evidence of that progress.

Sustainability is the product of initiatives in all sectors of our society. We should avoid marginalizing potential partners. The sheer number of actors, once motivated, can have a profound impact. This is true in community building, investing, environmental justice, education, buildings, and transportation. This is also true for stewardship, as in the case of the Los Angeles River.

Individual human beings are heroes within each of these realms. We are all part of the proverbial village. Every one of us has opportunities to help change the system.