Christine Quigley is the Research and Outreach Assistant for the Sarasota Bay Estuary Program and the Director of Programs for ((ecko)) Tours on the Gulf Coast of Florida. She holds a master’s degree in Environmental Science and Management and a bachelor’s in Marine Biology. Her past experience involved conducting research and educational initiatives for the National Oceanic and Atmospheric Administration and the Environmental Defense Center. In addition, she has provided Lean startup and marketing support to environmentally focused organizations. Her goal is to encourage environmental stewardship in any way, shape, or form and help others experience the benefits of having a connection to our natural places.

There’s no doubt that we are going through transitional times. Environmentally, socially and institutionally, we’ve seen a number of changes unfold over the last few years, even months. Within this shifting landscape, it’s all too easy to get stuck in the problem sphere. Take climate for example. Much of what we are exposed to considers the enormous problem as a whole. We see glaciers melting on one side of the planet and dust bowls gathering on another, and it’s almost automatic to think, “How in the world can I possible change this?” Although it is important to understand the concept of climate change on a global level, it is not necessarily productive to frame the “solution” in the same way, simply because there is no single global solution.

Solutions generally consist of two very important parts, the “what” and the “how”. Reducing global greenhouse gas emissions only answers the “what” part. The “how” is a much more complicated piece often overlooked by mainstream media because it is not consistent from place to place, and it tends to be less eye-catching than the problem itself.

It’s time to get out of the problem space. It’s time to explore further into the global greenhouse gas reduction solution. The only way to do that is to get local. Climate change does not distribute its effects similarly or equally across the globe. Therefore, our actions, and how we talk about climate solutions need to reflect that.

The good news is that communities all over the world are already tackling local climate issues. If we focus on these powerful examples, it will not only encourage shared solutions between communities facing similar effects, but it may also normalize the mindset of moving past the larger problem to find local, tangible solutions.

Here are examples of two very different communities tackling climate change in ways unique to their local needs and resources:

Florida is one of the most at risk states for climate change. Not only are its communities vulnerable to sea level rise, but also increased temperatures, changes in rainfall, and more intense and frequent storm events (The Florida Oceans and Coastal Council, 2010). Within the last few years, many of Florida’s cities, counties, and environmental organizations have begun analyzing how current and future changes will affect important infrastructure and environmental systems. Residents of Pelican Cove decided to take it upon themselves to ensure their community would be in the know and prepared for future changes. 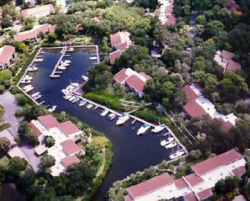 The 75 acre, low lying neighborhood sits right on Sarasota Bay on the Gulf Coast of Florida. Over the past several years, the neighborhood association has gone after grants to make improvements to local water quality and climate change preparedness. They’ve worked with local environmental groups to enhance the water filtration and flood protection capability of their storm water ponds. Last year, they hired the Southwest Florida Regional Planning Council to create a climate change adaptation plan specific to their area. As of 2017, they are the first neighborhood group to join the Science and Environment Council of Southwest Florida, a non-profit collaboration of local environmental organizations, agencies, and green businesses striving to increase science-based environmental understanding, conservation, and restoration.

For many inland cities around the globe, climate change will have large detrimental effects on air quality and temperature. There is a phenomenon known as the “heat island effect”, which states that temperatures in urban areas are higher than those in less dense surrounding areas. In some cases, the temperature difference can be as high as 10 degrees Fahrenheit. This is due to a combination of heat trapping surfaces in cities, higher amounts of waste heat from cars and industrial processes, lack of vegetation, and the general city layout of tall closely packed buildings (Santamouris, 2001). As more people move to cities, this will have huge cascading effects on air pollution, energy usage, and human health. 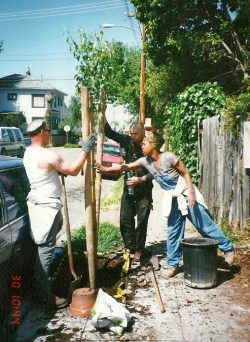 Urban Releaf, a local, Oakland-based organization is making strides not only to tackle air quality and higher urban temperatures, but also provide employment, education, and leadership opportunities for at-risk youth and young adults. Since 1998, the group has planted over 15,000 trees in urban landscapes around the East Bay region of San Francisco. They recruit residents to help with plantings and offer training, mentorship, and educational programs. They even provide a fruit tree ordering and installation service through their website. Over the years, partnerships with local universities and Urban Forestry groups have allowed them to contribute invaluable data to the field and improve the quality of life for many underserved neighborhoods.

Bringing awareness to community level solutions sends a strong, positive message that you don’t have to be part of a global environmental organization or an expert in technology to move the needle forward. Climate mitigation and adaptation can be done literally in your own neighborhood. These are only two of the countless examples waiting behind the fog of doom and gloom to be discovered. So, if you’re ready to get to work in the solution space, chances are you won’t have to look too far. And remember, even if it seems like your contribution is small, in the theme of crew consciousness, the little things matter, especially when everyone is doing them.

The Florida Oceans and Coastal Council. 2010. Climate Change AND Sea-Level Rise IN Florida.

The City of Sarasota Plans for Climate Adaptation