Since the recent events that have greatly escalated tensions between the United States and Iran, there’s been a lot of talk about the possibility of war. Though it’s an uncomfortable subject, it is worth examining. War and climate change are closely related in a number of ways. If a major military conflict was to break out, even if the world’s superpowers (the United States, Russia and China) were not at war with one another, it would be a catastrophe for the world’s climate. 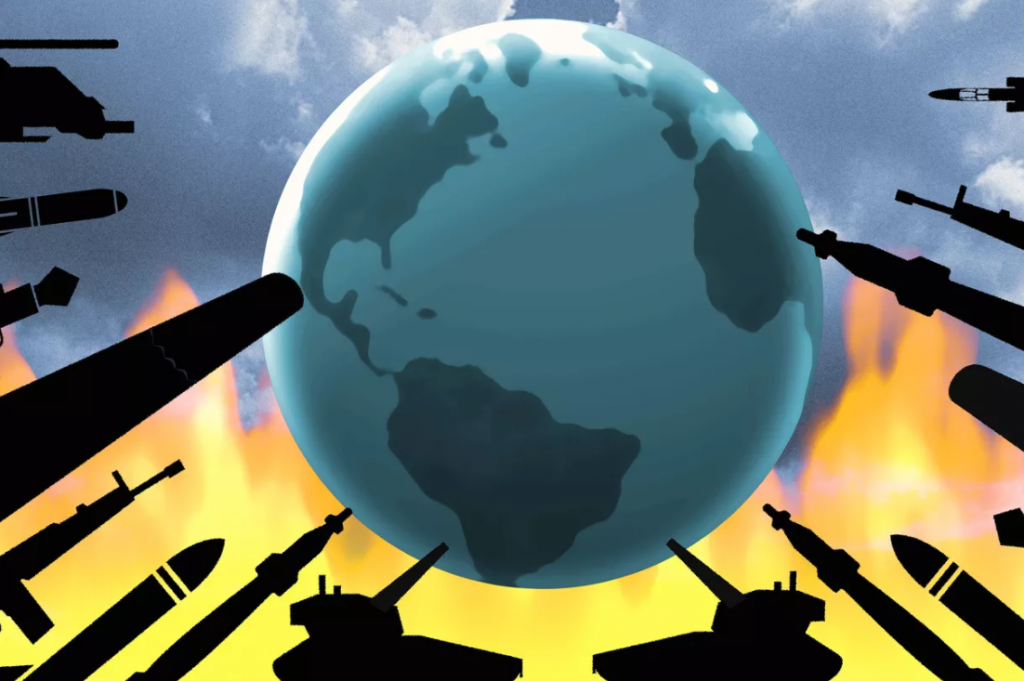 I didn’t write much about war in my book The Warmest Tide: How Climate Change is Changing History , but I did acknowledge that a major war, catalyzed by or significantly involving climate change, is a distinct possibility. It has now been 75 years since the end of the last military conflict that involved a substantial number of the world’s nations (World War II). The pattern of recent (~300 years) history shows an irregular cycle of relative political stability with social pressures building up under the surface that then erupt quite suddenly into short bursts of violent and transformative conflict. This is the pattern that preceded the cycle of wars at the end of the 18th and beginning of the 19th century (American and French revolutionary wars, followed by the Napoleonic Wars), and the global conflicts that began in 1914 and continued to 1945. Will this pattern repeat itself in the 21st century? We can’t be sure, but it’s generally dangerous to bet against long-term historical precedent.

A major war, whether between the United States and Iran or with some other configuration of nations, would be disastrous in terms of climate change. For one thing, wars generate ghastly amounts of carbon emissions. Modern armed forces, like the U.S.’s, Iran’s and China’s, involve staggering amounts of long-term and large-scale transportation, from ships delivering troops and supplies to distant ports, to the fuel burned by jets, armored vehicles, naval vessels, guided missiles and just about anything else, to the emissions from factories on the home front churning out supplies, ammunition, weapons and other materiel needed to support military operations. It’s likely that any government involved in a major war would prioritize its short-term military needs over all others… “Let’s win the war first, then we can talk about reducing carbon emissions.” The urgency of addressing climate change would be seen as a luxury that could only be given attention when the existential threat of war is abated. Climate change action would be one of the first casualties of any large conflict.

This is to say nothing about the environmental and climate effects of war itself. A conflict involving any Middle Eastern country, but especially oil producers like Iran and Saudi Arabia, would automatically result in oil infrastructure becoming a major strategic target. (Indeed, in September 2019 there was a major drone attack, probably directed by Iran, against an Aramco facility in Saudi Arabia.) As he withdrew from Kuwait at the end of the first Persian Gulf War in 1991, Iraqi dictator Saddam Hussein ordered the destruction of Kuwait’s oil wells, some of which were still burning a year later. Bombed or burning oil fields would cause a major uptick in global carbon emissions at the precise time that we need to reduce them. A war would be a major stumbling block to addressing climate change.

Any major military conflict that breaks out in the near future, whatever its initial trigger, would eventually involve climate change as a major issue. Wars rarely end up being “about” whatever started them. The Vietnam War began over what form of government South Vietnam would have, and ended up being about America’s place in the world order. The Civil War began over the question of secession, and ended up being about the definition of freedom in America. Any global conflict that breaks out in the 2020s will eventually, whether its architects intend it or not, involve the question, “What are we going to do about climate change?” Thus, as terrible as such a war would be, and as catastrophic for the Earth’s climate, those of us working toward climate change solutions would have a relevant role to play in that conflict.

From the standpoint of someone already alarmed about climate change, the prospect of war is even more alarming. We must work for peace while we still can, because peaceful cooperation among nations offers us the best chance to deal with climate change. But if war does come, we must face it realistically and rationally. I hope and pray it does not come. We can’t afford another distraction from dealing with the world’s biggest problem.