Atmospheric CO2 Increasing as Seas, Soils and Trees are Overwhelmed

On December 12, 2015 the Paris Climate Accord (PCA)*1 was adopted by consensus of the 195 members of the United Nations Framework Convention on Climate Change (UNFCCC).  News reports showed the celebrative mood of the participants.  Not only had the PCA been agreed upon, but the plan was going to try to limit global average temperature increase to 1.5oC  (2.7oF) surpassing the original goal of limiting global warming to 2oC (3.6oF).

In 2016, the amount of atmospheric Carbon Dioxide (CO2) rose by 3.3 ppm*2 (25.77 billion metric tonnes of CO2)*3 to 403.3ppm, the largest single year increase in 30 years.  In a healthy, functionally stable ecosystem, the carbon exchange balances out on an annual cycle between the atmosphere, the ocean and organisms.  It is during transition periods from one type of climate to another that we see major releases or sequestrations of atmospheric gases. 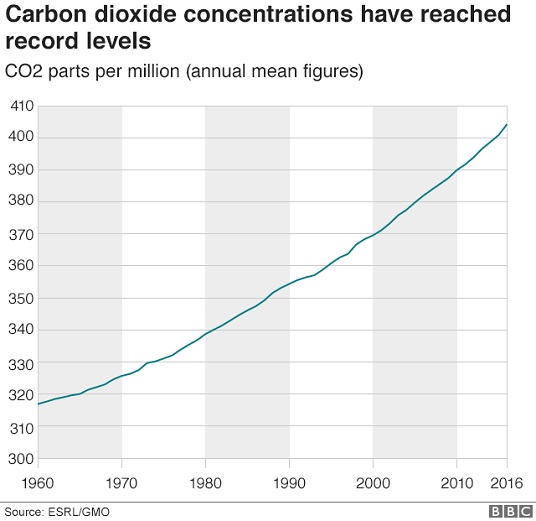 In 2017, the world is witnessing the first increase in CO2 emissions in 3 years*4. The estimated rise is 2%, most of that coming from an increase in the use of coal to make up for losses of hydropower, due to widespread droughts. 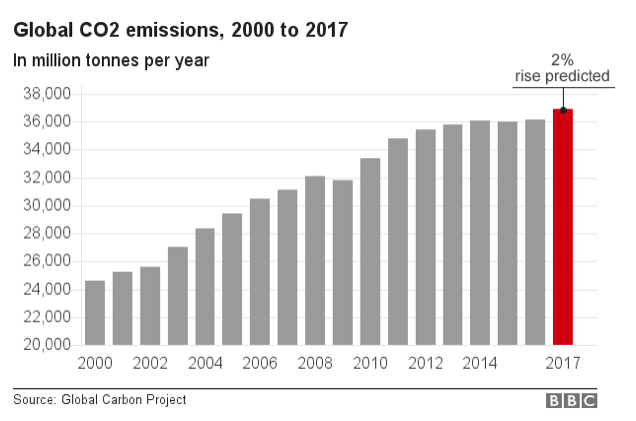 The Paris Climate Agreement is a well-intended document. While the PAC was a step forward in getting people and countries to agree that climate change was real, was taking place, was a liability, was human caused, and that the worst outcomes could be avoided by human action, the agreement had several weaknesses.

One was that each country set its own voluntary, non-legally binding target projections to reduce emissions.  The second was the five year time lag between agreeing to the PAC and the official start of the agreement. The third, and most problematic weakness, was that the cumulative promise made by all parties was too meager to achieve the stated goal; thus creating the Paris Gap*5 between preference and reality. 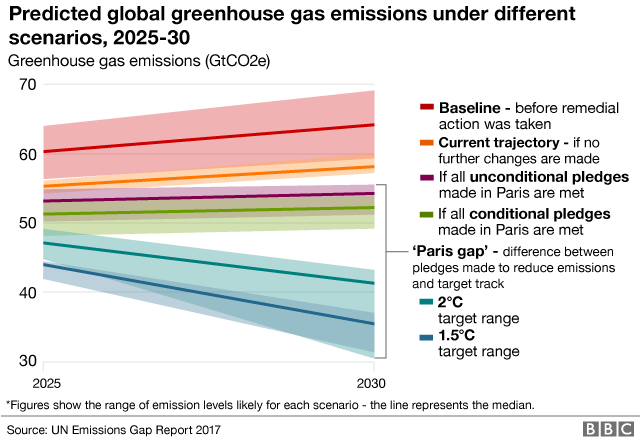 There is another critical factor to remember when trying to mitigate climate change, and that is simple reality (contrary to human nature) that humans are not in control of the myriad synergistic interactions that make up the life sustaining characteristics of Planet Earth.  With climate change,

“we’re not only dealing with forces of a far greater variety than even the atomic physicist encounters, but with life itself.”

The increase in atmospheric CO2 in 2016 was not about an increase in emissions, but the decrease in the capacity of the ocean and plant life to uptake (absorb or use) the CO2 due to droughts, wildfires, and high temperatures*7.  Humanity’s previous emission of greenhouse gases (GHGs) contributes to the cause, severity and changing frequency of these events making more and more of these events Human’s Nature.

The increase in CO2 emissions in 2017 was a result of the increased burning of coal*8.  In some cases, the coal was burnt to generate additional electricity to support a growing economy.  In other cases, coal was burnt to replace the hydroelectric power that was unavailable due to reduced water volume in rivers.  The degree to which we humans choose to think locally rather than planetarily is the measure of the amount of “unintended consequences” that we can generate globally.

Actions speak louder than words. Knowledge is neither a viable nor functional substitute for action.

“Nations do behave wisely once they have exhausted all other alternatives.”

“It’s not enough that we do our best; sometimes we have to do what is required.”

Let’s hope we get all of our rationales for procrastination out of our way and out of our minds quickly enough to fulfill the promises we made in the Paris Climate Agreement.  Failure should not be our default option because…

“we are entering a period of consequences.”