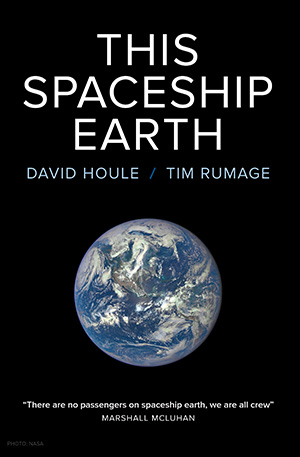 The title derives from quotes by two of recent history’s most visionary futurists. R. Buckminster Fuller wrote, “We are all astronauts on a little spaceship called Earth.” And he published an Operating Manual for Spaceship Earth. And Marshall McLuhan wrote, “There are no passengers on spaceship earth, we are all crew.”

Those concepts sparked co-authors David Houle’s and Tim Rumage’s framework for their book about climate change. They underpin the notion of crew consciousness. That is, thinking and acting as active crew members on spaceship earth… working together to ensure a safe and successful voyage.

Please read Chapter One here, for free. If it captures your imagination, you can then buy the book, and become crew.

Purchase the Book on Amazon

Spaceship Earth is where all humans live. There is no other known planet inhabited or inhabitable by humans – this is our only place. When viewed from space, this planetary home of ours seems a tiny beautiful blue orb in the blackness of space. It is the vessel in which we live, and upon which we can thrive.

The term Spaceship Earth, or variations of it, has been used intermittently for more than a century. It was largely R. Buckminster Fuller who made the term popular starting with his book “Operating Manual for Spaceship Earth,” published in 1969. That book, along with the famous “Earthrise” photo taken December 24, 1968 by Apollo 8 mission lunar module pilot, astronaut Major William A. Anders, gave us all a true sense of how unique Earth is in the known universe. It should be a reminder of how precious Earth’s health is to us.

If we all could start to think of our planet as a spaceship, we would have a shift in consciousness.

We know of spaceships from the space programs and science fiction. They are a craft of finite space and limited resources in which humans live. The crew has to be efficient as energy, water, and food are in limited supply. The craft is self sufficient only to the extent that the crew and their technology are capable of creating the next generation of resources from the remnants of past generations’ used material. The individuals living on these mobile space islands need to co-exist. Any problem with or on the spacecraft is a liability for all those on board. It is collective and collaborative survival in the extreme.

Now, think of Earth as Spaceship Earth with the same language. It is inhabited by humans – billions more than when Fuller wrote his book. It has a finite amount of resources and sustainability and efficiency are increasingly important. Water and food are precious. Due to the current human population of 7.3+ billion population and our growing impact on the quantity and quality of resources, humanity is experiencing their spaceship’s limitations. The air that many breathe is polluted. Much of our fresh water supply is being threatened. There are many issues about the food we eat, including over 900 million of us that are undernourished.

Humans now live in ever-closer quarters and need to get along. Everyone on Earth today is down-wind or down-stream from someone else, so a problem anywhere on the planet, in some way, is a problem for all on the planet.

There is one major difference. While spaceships and space stations can be refueled and resupplied from the home planet; that is not an option for Spaceship Earth. There is no other planet in the foreseeable future that can rescue, resupply, or serve as refuge for the inhabitants of Planet Earth. The critical difference between the spacecraft of the space programs and science fiction with Spaceship Earth is simply that: we live on a spaceship that must resupply itself from itself. This is why we need to understand that we are crew not passengers.

the group of people who operate a ship, airplane, or train

a person who is traveling from one place to another in a car, bus, train, ship, airplane, etc., and who is not driving or working on it

In this early part of the 21st century, we have now entered the time on Spaceship Earth in which the problems we face are in common and transcend political boundaries. To solve them, humanity will need to be collaborative in the extreme while thinking and acting at a planetary level. That is where we are.

As the Quartermaster’s Inventory of Spaceship Earth in Chapter 2 will indicate, human beings have exploded in number in the last few decades. There are 300% more humans alive today that in 1950. Our shear numbers and way of life are having a critical effect on all other forms of life on the planet. We are crowding out and making extinct other species at an unprecedented rate. We are experiencing profound changes in weather and sea level. The temperatures are rising. The status of the spaceship has moved into the critical area. All of this is now noticeable and documented.

We continue to live, act, and think as we have for decades, centuries, and millennia. Yet, there are too many of us to continue to maintain this path. In addition, the fundamental change of how we have lived in the last 200 hundred years has accelerated our predicament. The Industrial Age began when there were only 1 billion people alive. At that population size the Industrial Revolution might have been a sustainable at a planetary level. It is not with 7.3 billion people.

At this time, we are beyond equilibrium on This Spaceship Earth. A spaceship can only sustain itself if it stays within its resources and resource footprint. As of this writing, humanity is operating with a footprint of 1.6 of planetary resources. We are using 60% more planetary resources every year than can be replenished. We crossed the sustainable threshold of 1.0 about 40 years ago. What form of logic or belief can allow us to think that a continuation of this trend can result in anything other than disaster? The historical thinking of separateness, limited cause and effect, and living in conceptual and psychological silos that are unconnected has delivered us to this moment.

Yet, we fight with each other. We fight economic battles and real wars. We fight over land, water, energy, religion, race, ways of life, and boundaries. This is the story of human history. The problem is that we have populated the planet to the point where continuing that history could well lead to planetary catastrophe. We risk fighting each other to the point where all of us are at risk on a degraded, polluted, and stressed planet. At that point, we all lose.

We can think we are different from each other – and we are.

We can have different points of view – and we do.

We can be of different religious faiths – and we are.

We can stand in our differences – and we always seem to do so.

For all of our short history – in planetary terms – this sense of separateness has defined us. We will probably always need to have this sense of differentiation, though less so in the future than today. One’s country, religion, race, and individuality all help to give one a sense of self that separates me from you and us from them.

But now in the early part of this century, all of our differences are being overshadowed by the reality that we are all together on Spaceship Earth. That all-inclusive reality now trumps all the separate realities we hold so dear.

We have entered the Shift Age; the age and time of transition in the evolution of human thinking and consciousness from separateness to a planetary frame of reference.

With the global economic changes underway and the resultant social changes taking root, we are developing the identity of global citizens. Whether one has come to this new identity through one’s business or line of work or through political or cultural issues, we all, to varying degrees, see ourselves as global citizens. Globalization is no longer simply an economic term: it is the term of what is and what will course through all aspects of human society for the twenty years of the Shift Age.

We have entered the global stage of human evolution.

This Spaceship Earth is the name for the specific state of the planet at the early stage of the 21st century. This Spaceship Earth (TSE) is the planet today. It is this large concept that shapes our thinking and will change our consciousness. You may be from Florida, Chicago, London, Mumbai, Shanghai, or Rio. You may be of this state or that province. You may think you are a citizen of a nation. But first and foremost, you and those places are all on Spaceship Earth. That is the one thing we all have in common – we live on the same planet, and we have no other spaceship. All we have, and all humanity will have, is TSE.

Of course, we can and will continue to see ourselves as citizens of different countries or members of different religions and groups. But all of us in these groups must now realize that we are all threatened to some degree by not first thinking of ourselves as inhabitants of This Spaceship Earth. We all live, work, and worship here and want to continue to do so. Unless we now move to a higher collective consciousness of all living on TSE, our long-term existence will be challenged by what we have been and are doing. We have been unconscious passengers on TSE. We must now move as quickly as possible to a new way of thinking of ourselves as conscious crew of TSE.

We are now in the fourth age of Modern Humanity.

Thinking as crewmembers of TSE is one of the fundamental manifestations of our change of consciousness that will then lead to a collective change in our behavior towards TSE. We all must become, first and foremost, aware and active crewmembers on This Spaceship Earth. As many of us as possible, need to move to this dramatically altered sense of self and place as soon as possible.

What our future will be and how it will unfold is dependent upon our changes in thought, action, behavior, and awareness, coupled with the speed of our transition, without relapse, to TSE consciousness.

As we will make perfectly clear in this book, as of 2015, we have already created a future that is far different from what we have experienced in the last millennium. We have already taken actions, the consequence of which will bring unprecedented change to the planet in the years and decades ahead. Trillions of dollars of losses, millions of lives lost or disrupted, tens of thousands of species lost or soon to become extinct. This will happen even if all of us developed TSE crew consciousness today. We must move to, share, live, and act with this new consciousness as soon as we can. The mission and vision of this book is to accelerate the crew consciousness of humanity as fast as possible.

As we change from being unmindful passengers to conscious crew – members of TSE, we need to inventory the status of our spacecraft and assess the implications of our needs and desires related to the quantity and quality of the resource base. We need this information to insure that we, the crew, can interact with TSE in a way that benefits both TSE and the longevity of the crew.

Purchase the Book on Amazon