by Paul Krugman (originally published in the New York Times)

As terrible as many things in the world are, climate is unique in posing an existential threat to civilization. And it’s horrifying that so many political figures are dead set against any serious action to address that threat.

Despite that, there’s still a chance that we’ll do enough to avoid catastrophe — not because we’ve grown wiser but because we’ve been lucky. We used to believe that achieving big reductions in greenhouse gas emissions would be difficult and expensive, although not nearly as costly as anti-environmentalists claimed. Over the past dozen years or so, however, we’ve experienced a technological miracle. As nicely documented in an article by Max Roser, the costs of solar and wind power, once dismissed as foolish hippie fantasies, have plunged to the point that quite modest incentives could lead to a rapid reduction in use of fossil fuels: 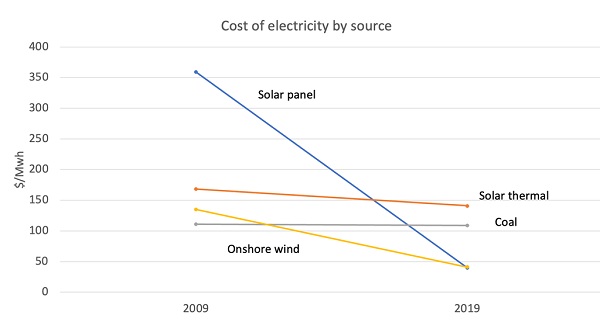 Credit – Our World in Data

But was it really luck? Did this miracle — actually two miracles, since generating electricity from the sun and from the wind involve completely different technologies — just happen to arrive in our moment of need? Or was it a consequence of good policy decisions?

The answer is that there’s a pretty good case that policy — the Obama administration’s investments in green energy and European subsidies, especially for offshore wind — played a central role.

What’s the justification for that conclusion? Start with the fact that neither wind nor solar power was a fundamentally new technology. Windmills have been in widespread use at least since the 11th century. Photovoltaic solar power was developed in the 1950s. And as far as I can tell, there haven’t been any major scientific breakthroughs behind the recent dramatic decline in both technologies’ costs.

What we’re looking at, instead, appears to be a situation in which growing use of renewable energy is itself driving cost reductions. For solar and wind, we’ve seen a series of incremental improvements as energy companies gain experience, big reductions in the price of components as things like turbine blades go into mass production and so on. Renewables, as Roser points out, appear to be subject to learning curves, in which costs fall with cumulative production.

And here’s the thing: When an industry has a steep learning curve, government support can have huge positive effects. Subsidize such an industry for a few years, and its costs will fall with experience, and eventually it will reach a tipping point where its growth becomes self-sustaining and the subsidies are no longer needed.

That’s arguably what has happened, or is on the verge of happening, for renewable energy.

The American Recovery and Reinvestment Act of 2009 — the Obama stimulus — was mainly intended to address the collapse in demand that followed the 2008 financial crisis. It helped a lot but got a bad reputation all the same because it was underpowered and hence failed to produce rapid recovery. (And no, that’s not hindsight. I was screaming about it at the time.) But it also included significant funding for green energy: tax breaks, subsidies, government loans and loan guarantees.

Some of the projects the government backed went bad, and Republicans made political hay over the losses. But venture capitalists expect some of the businesses they back to fail; if that never happens, they aren’t taking enough risks. Similarly, a government program aimed at advancing technology is bound to end up with some lemons; if it doesn’t, it’s not extending the frontier.

And in retrospect, it looks as if those Obama initiatives really did extend the frontier, pushing solar energy in particular from a high-cost technology with limited adoption to the point that it’s often cheaper than traditional energy sources.

Obama’s policies also helped wind, but there I suspect that a lot of the credit goes to European governments, which heavily subsidized offshore wind projects early in the last decade.

In short, there’s a really good case to be made that government support for renewable energy created a cost miracle that might not have happened otherwise — and this cost miracle may be the key to saving us from utter climate catastrophe.