A group of artists and writers including Zadie Smith and Sir Mark Rylance have spoken out against the thinktanks and lobbyists at the heart of Westminster, gathering with hundreds of protesters near their offices on Wednesday night. 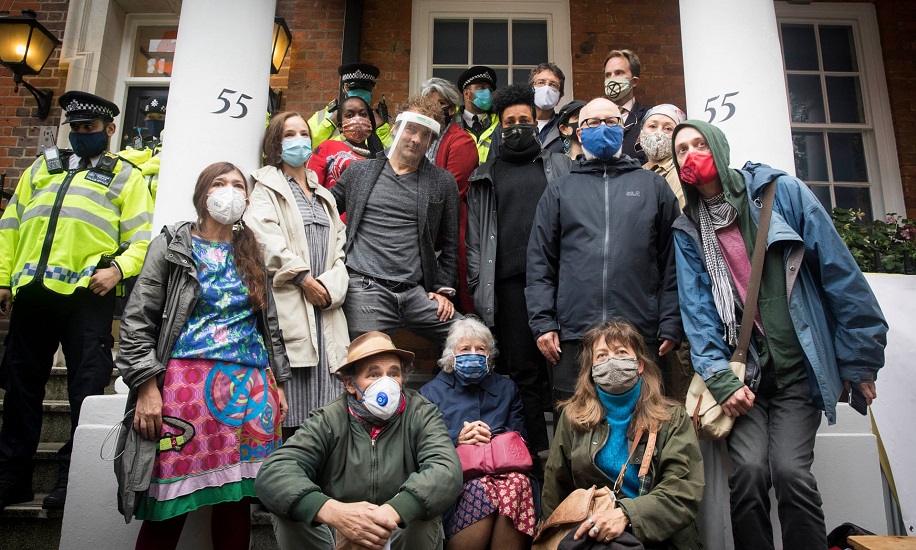 Speakers from Writers Rebel, a group formed in support of the aims of Extinction Rebellion, blocked Tufton Street in London amid a noticeable police presence. Offices on the street include that of the Global Warming Policy Foundation, which states on its website “while [it is] open-minded on the contested science of global warming, [it] is deeply concerned about the costs and other implications of many of the policies currently being advocated”.

Four people, including author and XR member Rupert Read and Writers Rebel co-founder Jessica Townsend, were later arrested after spraying stencils reading “Lies, Lies, Economics and Lies” on the entrances to 55 Tufton Street. The group also occupied the street on large tripod constructions, and Read poured paint representing blood down the steps of the building.

Speaking earlier, Smith, author of the novels White Teeth and On Beauty, said she had come to realise that her previous belief, that climate change denial was rooted in a genuine fear, was “naive”. “Now we know better. Now we know the outsized, unruly emotions that surround the scientific fact of climate change are fuelled by something far more calculated and external than species shame. They are not organic, natural or unavoidable, but rather feelings manufactured, targeted, organised, and paid for, largely by oil companies and other vested economic interests who are prepared to sacrifice your long-term future for their short-term profit.

“There are people whose business it is to make science look like opinion. Who aim to transform genuine feelings of climate grief and guilt into defended ignorance and positive denial,” Smith said. “This is no longer, if it ever was, a question of personal morality. This is a structural question of corrupt politics, of lobbying at the highest level of our government. It involves the economic exploitation of the greatest existential challenge the human race has ever known, the survival of the planet. The fate of this planet cannot be decided by well-remunerated men and women in shadowy offices. This planet belongs to the people. More accurately, we all belong to it.”

Rylance resigned from his role at the Royal Shakespeare Company in 2019, after 30 years, over the company’s ties to British Petroleum (BP). “It is a great comfort for me to be out here among people who I feel share my sense of confusion,” said Rylance, to applause. “There is a culture of misinformation and lying that surrounds us. And it is only getting worse.”

Other speakers included Dame Carmen Callil, founder of the publisher Virago, and the MP Caroline Lucas, who came from tabling the climate and ecological emergency bill.

Margaret Atwood, author of books including The Handmaid’s Tale, lent her support via video message. “Climate change due to human activity is not a theory, it is not an opinion, it is a fact,” she said. “Denial of this fact in the interests of big money will lead to our extinction as a species.”

At the launch of the Writers Rebel campaign last week, the writer and actor Stephen Fry said people had a duty to “expose the lies” of climate change denial. The demonstration was organised in conjunction with the nascent Extinction Rebellion group Money Rebellion, which will target the finance industry for its inaction on the climate emergency.

The event took place as part of XR’s 10-day protest to demand government action on the climate crisis. The Metropolitan police said more than 230 people involved had so far been arrested.