Toronto’s urban canopy is already home to over 10 million trees, which currently envelops 26% of the city’s surface area. Mayor John Tory, however, has bigger plans for Ontario’s capital; he wants to transform Toronto into a waking ecological metropolis. A local architecture firm, Brisbin Brook Beynon, is helping Tory achieve his goal, in a very cool, but unconventional manner.

Read the entire article at NarCity.

The firm will construct a 27-floor “vertical forest”, inspired by the Bosco Verticale-residential towers in Milan, constructed in 2014 and home to 11,000 plants that line the sides of the buildings. 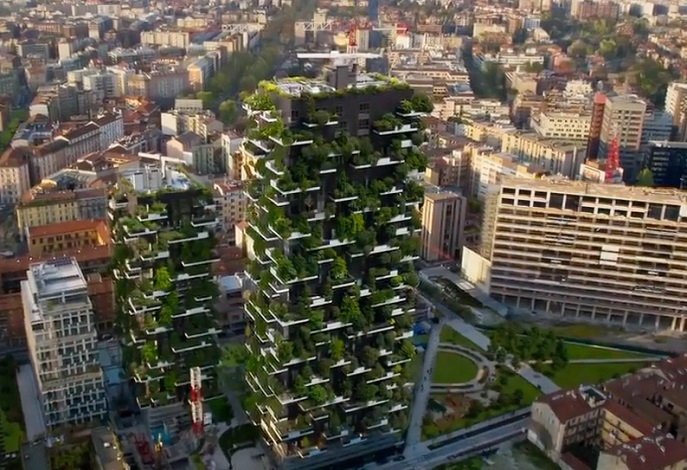 Toronto’s version of the vertical forest may be standing as early as late 2020, proving that green space is not confined to the ground. When lead architect Brian Brisbin began conceptualizing how to bring the mayor’s vision of increased tree coverage to life, he learned that all of the technology that allowed the Milanese Bosco Verticale to function actually originated in Canada and North America.

Since their development, numerous copycat buildings have popped up around the world, highlighting the fact that the buildings’ exceptional designs are multi-purpose, and are intended to facilitate the global eco-fight against pollution.

According to Brisbin, “We have a lot of depth of specialty in this area in Toronto, with horticultural and agricultural universities and research facilities,” he says, “and we’ve brought a lot of together to take a very science-based approach to developing this project.”

The trees will eventually be evenly distributed throughout the building’s exterior and will be directly connected to an integrated monitoring system that measures water volumes, nutrient densities, and external conditions that affect the plant life.

Although covering high rises with trees will not allow metropolitan cities like Toronto to meet its urban canopy goals all on its own, these types of projects undeniably deliver benefits to the surrounding region. For example, cleaner air and more space for birds and pollinator species facilitate more mainstream green infrastructure projects, as a result.