From New York City to San Francisco, architects and city planners are going green to address the housing crisis.

Read the entire article at The Atlantic.

Nearly a decade ago, New York’s city and state agencies held an architectural competition to transform a former South Bronx freight yard. Architects were challenged to team up with developers to come up with plans for affordable, sustainable housing units in an era of accelerated urban growth. 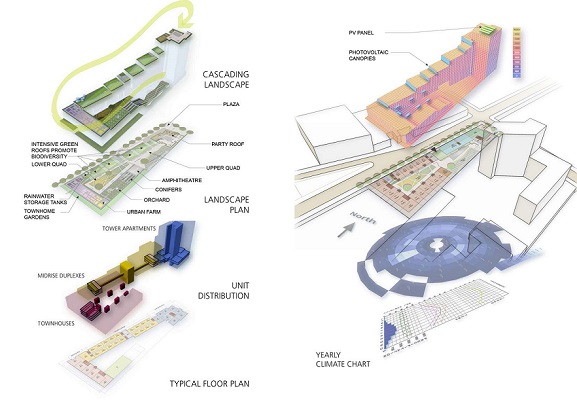 The ask couldn’t have been more appropriate: Though cities cover only 2 percent of global landmass, according to a report on sustainable development published by Citi, they contribute to the majority of carbon emissions.

The plans chosen by the agencies judging the competition address a crisis underway in cities around the world. In the U.S. alone, according to the National Low Income Housing Coalition, there is a shortage of 7.2 million homes attainable for extremely low-income households to rent. At the same time, cities that grow without an eye toward managing resource efficiencies become burdens to an already overstretched global environment — not to mention terrible places to live.

Of the 32 proposals submitted to the competition in New York, the winning project was one from two architecture firms and two developers called Via Verde. The postmodern building since constructed on the challenging site in the South Bronx now sports stepped roofs that provide solar access and other green roofs where residents grow vegetables. The apartments have two exposures to provide cross-ventilation, reducing the need for energy-gorging air-conditioning. All the sustainability measures incorporated into the final designs save on up-front construction costs while husbanding scarce energy resources. Of Via Verde’s 222 residential units, 151 are affordable rentals and 71 are co-op units (three-bedroom co-ops sold for $192,750 each).

Via Verde’s cost specifications undercut a common yet erroneous perception: that affordability and sustainability in housing are in conflict. According to a survey conducted by the U.S. Green Building Council, everyday respondents expected that sustainable construction adds 17 percent to the cost of construction, yet it typically adds closer to 2 percent. “The most common misperception about sustainable design is that it costs too much,” says Lance Hosey, design director of global architecture firm Gensler and author of The Shape of Green: Aesthetics, Ecology, and Design. “But research and experience show that higher performance doesn’t have to mean higher costs.”

Via Verde was completed in 2012. For Bill Stein, principal architect on Via Verde for Dattner Architects, it’s not just the numbers that matter — it’s the enduring impact that developments like it have on entire neighborhoods and cities. “People are pretty happy. They take a lot of pride in the building. And you can sense a real sense of community there,” Stein reflects. “Via Verde has become a symbol for the resurgence of the South Bronx.”