A climate denier is in the White House, pushing policies that will boost emissions. Congress is doing nothing to stop him. So citizens and local governments who are facing the impacts of rising seas, worsening heat waves and extreme weather are increasingly looking to the courts for help.

Cities, states and the fishing industry want courts to hold fossil fuel companies accountable for global warming. Others argue government inaction violates rights. The past year saw a surge in new lawsuits filed against fossil fuel companies, and major developments in cases pressing governments for action in the United States and abroad. 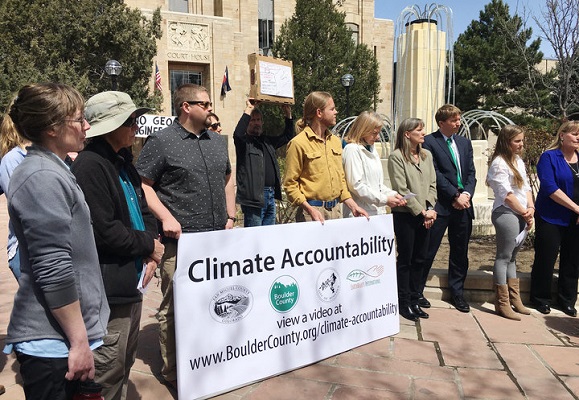 In Colombia and the Netherlands, citizens won rulings in 2018 ordering their governments to cut emissions and protect forests. By framing climate change in terms of human rights, those cases and similar ones filed in the U.S. and other countries are transforming how the courts address the issue, said Patrick Parenteau, senior counsel in the Environmental and Natural Resources Law Clinic at Vermont Law School and an informal adviser to some of the plaintiffs’ lawyers. “It’s pushing the boundaries of law everywhere,” he said. “Climate change is changing the law.”

There are currently a couple of dozen significant lawsuits around the world that are asking courts to order actions by governments or the fossil fuel industry in response to climate change.

What began with a handful of California cities and counties in 2017 spread across the country this past year, as New York City, Baltimore, Rhode Island and local governments in Colorado and Washington State sued fossil fuel companies.

The plaintiffs are seeking compensation to help pay the costs of protecting residents from rising seas, worsening wildfires, extreme heat and other effects of climate change. Two law firms are arguing most of these cases. They allege that energy companies knew about the dangers associated with their products, but lobbied against capping emissions anyway while sowing doubt about climate science.

In November, the West Coast’s largest commercial fishing association filed a similar suit. Algal blooms tied to warming waters have led to closures of the crab fishery in recent years, and the plaintiffs are seeking compensation from the fossil fuel industry for the associated losses.

The lawsuits filed against fossil fuel companies target one of the world’s most powerful and lucrative industries. But a separate class of cases is seeking something much broader: They’re arguing that governments have a legal obligation to protect their citizens from climate change.

A group of nearly 900 Dutch citizens and a nonprofit were among the first to make the claim, arguing that their government was failing to meet its own goals for emissions cuts and violating their rights in the process. In October, a Dutch appeals court upheld a lower court ruling ordering the government to cut emissions 25 percent below 1990 levels by 2020. The government said it will appeal the most recent decision, even as it works to meet the emissions goal.

In the U.S., a group of children and young adults who are suing the federal government were poised to go to trial in October in a similar case. The plaintiffs are trying to establish a Constitutional right to a stable climate and are seeking a court order that the government come up with a plan to phase out fossil fuels. Simply holding a trial would be a major victory for the children, but the Supreme Court put the trial on hold less than two weeks before the scheduled opening arguments. The case is now in the hands of appeals court judges with the Ninth Circuit, who will decide whether to allow a trial.

In October, New York Attorney General Barbara Underwood capped a three-year investigation into ExxonMobil by suing the company in state court, accusing it of misrepresented the financial risks that climate change poses to its business. It may be legal to lie to the public, the case effectively argues, but not to shareholders.

The lawsuit was a significant development because, unlike most of the local and state claims, it relies on a state law that gives prosecutors great powers to go after companies for financial fraud. A New York judge set a trial date for October 2019.

It wasn’t the first case to charge Exxon with securities fraud,. In 2016, a shareholder filed a class action suit against the company in a Texas federal court, saying corporate officers had made false and misleading statements about how the company was assessing climate risks, artificially inflating the company’s stock price. That lawsuit cleared a hurdle in August when a federal judge denied a motion by Exxon to dismiss the case.