Although their case remains on hold while the Supreme Court reviews a last-ditch, extraordinary motion by the Trump Administration, the 21 young plaintiffs in the landmark climate suit Juliana v. United States have already taken climate litigation into previously uncharted territory.

The plaintiffs, who come from communities around the country already dealing with debilitating effects of climate change, allege that the federal government is violating their Constitutional rights to life, liberty and property by promoting a fossil fuel-based energy system that exacerbates climate change. Their suit, filed in 2015, successfully convinced a U.S. District Court judge to order the case to trial and until two weeks ago, had dodged every effort by the federal government to halt the case. 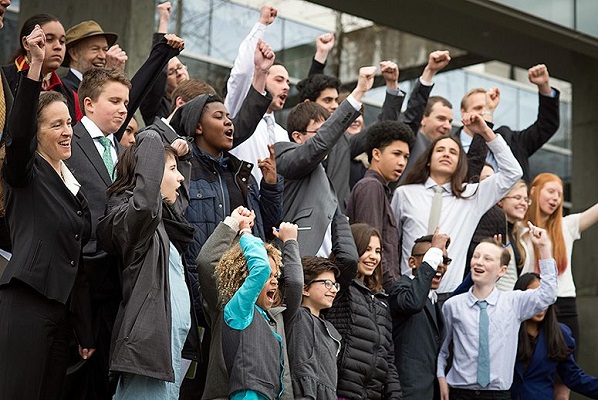 The trial had been scheduled to begin on October 29. The Supreme Court still has not ruled on the Trump administration’s request for a writ of mandamus, a rarely granted legal maneuver that overrules a lower court before a trial has even occurred. That request was part of a persistent government effort to stop the case’s momentum to trial. It was its sixth mandamus request and second to the Supreme Court.

Why the government appears so frantic to avoid the trial has been an overriding, and unanswered, question. But part of the reason could be that the case puts the government in an uncomfortable legal position. Much of the evidence used by the young people to prove they are being harmed by climate change comes from the government itself.

“What’s tricky for the Juliana plaintiffs is not the facts, it’s the law—is there actually a claim you can bring that the United States has this essentially fiduciary or trust obligation to future generations to protect the planet,” said Ann Carlson co-director of the UCLA School of Law’s Emmett Institute on Climate Change and the Environment. “That’s the fundamental argument of the plaintiffs and whether that has a basis in the Constitution is a tricky question.”

When the U.S. gets sued, she said, it’s typically over a technical regulation, with lawyers arguing about what kind of administrative deference someone should get or how provisions of a statute should be interpreted. “In this case, the evidence that the plaintiffs are seeking to put on trial is much more dramatic and the plaintiffs are much more sympathetic than is typical,” Carlson said. “You have 21 kids, they’re kids who are from areas that are already being affected by climate change, you have world-renowned scientists who are going to have an opportunity to testify about what is happening with climate change and why it’s so serious and we don’t usually see that kind of evidence put on.”