ClimateFortnite is a channel full of climate scientists who discuss issues of global warming while playing Fortnite on Twitch, hoping the platform’s massive reach will get their message in front of more eyeballs. And according to Henri Drake, a graduate student in climate science at MIT, it specifically gets climate change in front of the young audience who will have to deal with the effects of the actions (or inaction) humans take right now.

Read the entire article on Wired.

“It builds a community where people can ask the hard questions directly to an expert,” Drake says. “For a topic like climate change that is steeped in misinformation, direct access to experts is crucial.” Drake is the host of ClimateFortnite, but the idea for it isn’t entirely his. Credit there goes to Katharine Hayhoe, a scientist at Texas Tech University, who posted a tweet back in July bemoaning the fact that her recent webinar on climate science only had 1,000 views on YouTube, while her 11-year-old’s Fortnite clip had some 10,000 views in less than 48 hours. Following that tweet, several folks suggested combining the two formats. When no one else offered to do it, Drake — who’d started playing Fortnite about a month or so prior — decided to try. 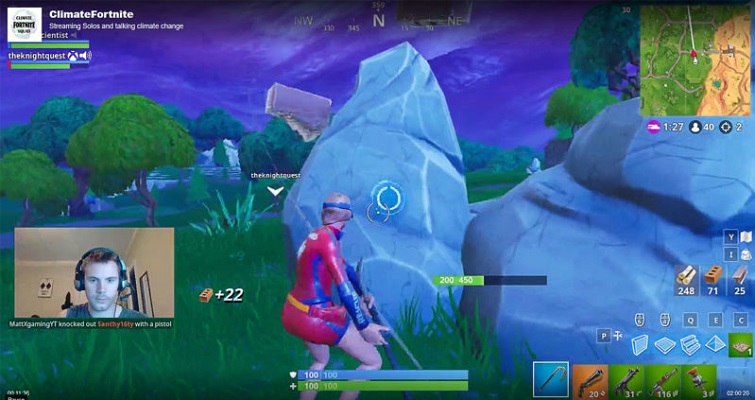 Drake sent up a flare on Twitter looking for scientists to contribute, and ultimately got quite a few to sign on. The videos can be anywhere from a few minutes to a couple hours. Twitch boasts some 15 million daily active users, and many of those are Fortnite fans. Not to mention, Drake’s stream could also attract more n00bs who just want to know the basic facts about global warming and are afraid to ask. It can also serve as good PR for Fortnite itself, which has lately hit that level of popularity that comes with panic about whether or not the game is affecting athletic performance or breaking up marriages.

Being able to relate is key. “Scientists do a good job of communicating via traditional routes — talking to journalists and policymakers and writing op-eds,” says Andrew Dessler, a professor of atmospheric sciences at Texas A&M who has been featured on Drake’s channel. “But not everyone listens to policymakers or reads op-eds or follows scientists on Twitter. ClimateFortnite is a great way to reach people who don’t get news from traditional sources.”