If Paris’s socialist mayor Anne Hidalgo gets her way — and gale-force opposition is trying to make sure she doesn’t — one day you won’t be able to drive a gas-powered car through Paris, but you will be able to breathe. That is the choice, and it should be an obvious one. No city should make it necessary (or, really, possible) to run an errand, drop off the kids, or get to work in a two-ton, fume-spewing capsule engineered to travel at high speeds and crush any creature that gets in the way. Piloting a private car through city streets will eventually come to seem as loony as commuting by tank.

Last year, Hidalgo declared the goal of ridding Paris of all but electric vehicles by 2030. She expressed the hope that all good citoyens would trade in their gazole-guzzlers for Teslas and Volts by then, without the need for draconian rules. But many saw her stated optimism as a call to eliminate cars of any kind from the city’s streets. 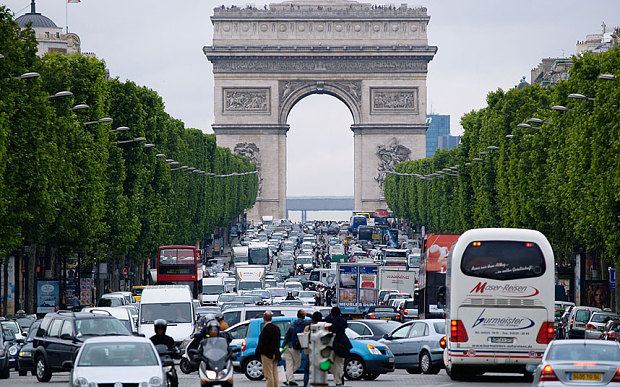 Revolutions don’t come easily, and Hidalgo is chipping away at a crust of history and culture that is more than a century thick. The desire to sweep Paris clean of dangerous, street-hogging private vehicles dates back at least to 1790, when an anonymous pamphleteer claimed that pedestrians’ rights were human rights. In the 1870s, Baron Haussmann laid down grand boulevards through the tangled heart of the city, creating wide, shop-lined sidewalks flanking even broader, straight-shooting roadways — the flâneur’s turf and the traffic artery, in one convenient package. A generation later, the motorcar forced the city to bend to its needs, instead of the other way around. Sidewalks were narrowed to make room for parking. By the 1970s, the Boulevard Périphérique looped around the metropolis, a moat of traffic that divided the city proper from the bleak high-rise suburbs beyond. The Seine’s picturesque embankments were commandeered for highways.

Hidalgo imagines a city where cyclists, amblers, kids, and the wheelchair-bound can circulate freely and without fear. The beguiling apparition atop Montmartre is a view onto a carless city. She actually has the clout to make that fantasy come true — once a year. Last September 16, a Sunday, marked the fourth annual journée sans voitures, with internal combustion engines banned from all 20 arrondissements. The air cleared a bit, the noise level dropped, and pedestrians discovered how spacious, airy, and serene their city could be.