Many U.S. coastal communities, unprepared for flooding and other effects of global warming-driven sea level rise, are heading toward an imminent downgrade of their credit unless they act quickly, a new report says.

The report warns that federal subsidies for rebuilding flooded properties, coupled with the rollback of standards for that rebuilding, create the illusion that cities and towns can continue to ignore flood risks without financial consequences. But a reckoning is coming, says “Credit Downgrade Threat as a Non-regulatory Driver for Flood Risk Mitigation and Sea Level Rise Adaptation,” a white paper published last month by the University of Pennsylvania Scholarly Commons. 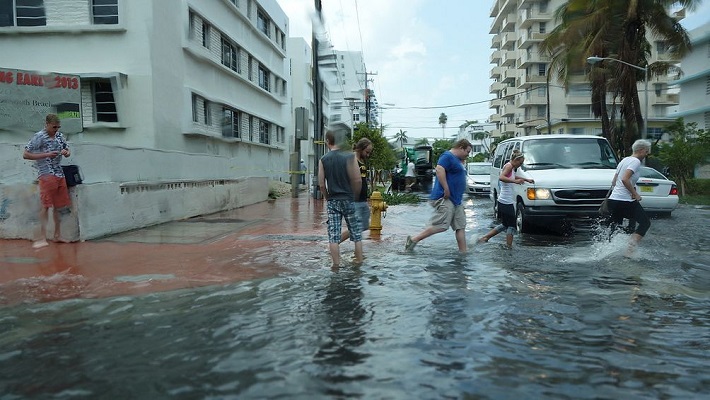 The absence of clear market or government warnings about imminent risks of climate change is leading many communities to squander what could be their last chance at affordable credit to fund resilient infrastructure projects, the report says.

John Miller, the paper’s author and a water resources engineer who studies the connection between credit ratings and climate change, said a shift is coming soon. Even if U.S. policy and spending keep absorbing the risk of rebuilding in flood zones in the short term, that is unlikely to continue indefinitely as investors, underwriters and credit ratings agencies are asking increasingly pointed questions about sea level rise-related risks. That could quickly lead to credit downgrades.

“The rating companies are really being pushed by the investors to look at the term of a bond. During the term of a bond, you have now changing conditions that put more risk on the revenue based on property values,” Miller said. “If you’re issuing a 30 to 40-year bond, your investors are already looking toward, say, 2050.” By that time, more than 300,000 properties in the U.S. currently worth $136 billion could be rendered unusable by routine flooding unless carbon emissions and rapid ice sheet loss can be significantly cut.

The report urges municipal leaders to stop taking their cues from the federal government when it comes to preparing for the effects of sea level rise. Last year, President Donald Trump rescinded the Federal Flood Risk Management Standard that had been signed by President Barack Obama in 2015 setting new goals for mitigating flood risk.

The National Flood Insurance Program has long covered property that private insurers refuse to cover. That means the taxpayers absorb the risk and foot the bill for rebuilding when disaster strikes. Last year, that bill was astronomical, with Congress spending $130 billion more than it had allocated to hurricane recovery in a year that included massive damage from Hurricanes Harvey, Maria and Irma.

“What are we going to do when sea level rise is constantly battering cities? Declare a chronic emergency? We’re talking about hundreds if not thousands of cities at risk,” Miller said.

Craig Fugate, who directed the Federal Emergency Management Agency under Obama and President George W. Bush, said, “Congress will always be willing to fund it after the fact, but we’re growing our risk so fast that we’ll never catch up.”

Fugate has long advocated for shifting policies and spending toward prevention, “but every time we try, we are fighting realtors focused on their commissions,” he said. “Why are we subsidizing risks for realtors and builders at the expense of the taxpayers? It smacks of socialism to me.”